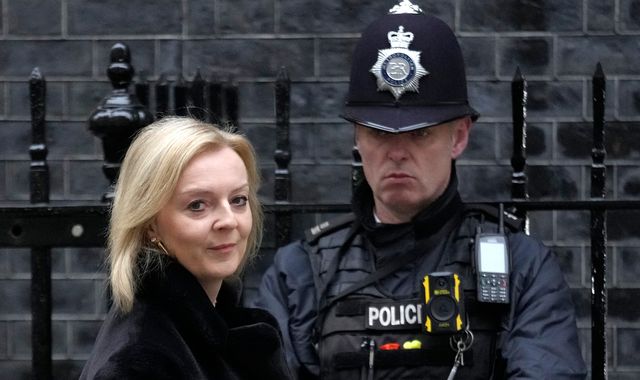 Foreign Secretary Liz Truss has dismissed suggestions the government is paralysed by the “partygate” allegations facing Boris Johnson – but an ex-army chief said the row had “weakened” the UK’s efforts in tackling the Ukraine crisis.

The prime minister is expected to travel to Eastern Europe in the coming days – as well as hold a call with Vladimir Putin – amid growing tensions between Moscow and the West over Russia’s build-up of troops on Ukraine’s border.

At the same time, Mr Johnson is still awaiting a senior civil servant’s report into multiple claims of COVID breaches in Downing Street during lockdown restrictions.

The publication of Sue Gray’s report has been delayed by the launching of a Metropolitan Police investigation into a number of the partygate allegations.

This has piled the pressure on the prime minister over a scandal that has seen Conservative MPs openly question Mr Johnson’s future in Number 10.

Johnson ‘sitting on a time bomb’

Lord Dannatt, the former chief of the general staff, claimed the ongoing partygate inquiries were a “time bomb” sitting under Mr Johnson.

“I think Boris Johnson is in a very precarious position,” he told Times Radio. He said that “at a time of an international crisis”, the UK’s “flawed” leadership meant that the West was “weakened” in its response.

Asked if the partygate row was undermining the UK’s response to the Ukraine situation, he said: “Of course it is. We are weakened.

“He [Mr Johnson] will travel to Moscow, or wherever he’s going in Eastern Europe, this week, but everyone will know that he’s a man with a time bomb sitting under him.”

The retired army officer added: “We’ve got to sort out the leadership of this country. We’ve got to get that sorted out. Either get behind Boris Johnson or get rid of him and let Rishi [Sunak] or someone take over.”

The prime minister’s political opponents at Westminster have also claimed Mr Johnson is unable to deal with major issues – including soaring energy bills – due to the lingering partygate scandal.

But, speaking to Sky News’ Trevor Phillips On Sunday show, Ms Truss dismissed the suggestion that the government was “paralysed” by the partygate row.

“I don’t recognise your characterisation of the situation,” the foreign secretary said, citing her recent visits to Brussels and Northern Ireland and upcoming trip to Ukraine.

Labour: UK ‘being held back’ by PM

Speaking on the same programme, Labour frontbencher Lisa Nandy rejected a suggestion the opposition had missed an opportunity to force Mr Johnson out of Number 10.

“All of this is up to the public, in the end the prime minister, if he stays, will have to face the public in a general election,” she said.

“We just agreed and moved on very quickly from the idea that the prime minister could put an end to this, be honest and come clean, but he is not going to.

The prime minister’s estranged former chief adviser Dominic Cummings branded Mr Johnson a “complete f***wit”, as he compared removing the prime minister from power as “an unpleasant but necessary job” such as “fixing the drains”.

“What’s the point of him and Carrie just rattling around in there and f****** everything up for everyone and not doing the job properly?,” he said in an interview with New York magazine.