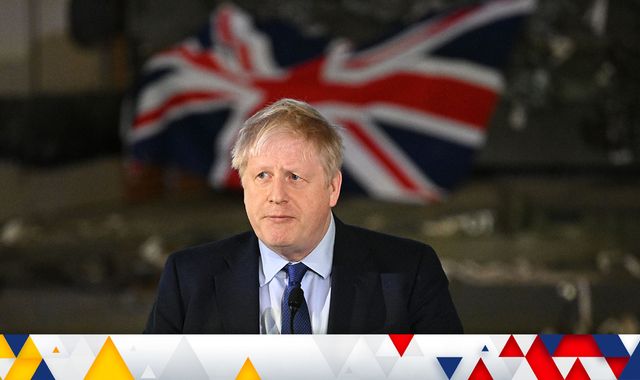 Boris Johnson has claimed Vladimir Putin is trying to “rewrite the rules” of international order “by military force” – as he prepares to host world leaders for talks at Downing Street.

Canadian Prime Minister Justin Trudeau and Mark Rutte of the Netherlands will visit Number 10 on Monday.

On Tuesday, Mr Johnson will host leaders of the V4 group of central European nations – the Czech Republic, Hungary, Poland and Slovakia – which are already experiencing the impact of Ukraine’s humanitarian crisis.

In an essay in The New York Times, Mr Johnson wrote: “Putin must fail and must be seen to fail in this act of aggression. It is not enough to express our support for the rules-based international order – we must defend it against a sustained attempt to rewrite the rules by military force.

“The world is watching. It is not future historians but the people of Ukraine who will be our judge.”

In the same article, Mr Johnson has also launched a six-point plan of how the international community should resolve the crisis – including humanitarian and military support, economic sanctions, an attempt to find a diplomatic solution, and a renewed effort to strengthen security across Europe.

Foreign Secretary Liz Truss has conceded Western countries were too slow to change their approach to Russia, especially after the annexation of Crimea in 2014 and the Salisbury Novichok poisoning in 2018.

“I believe that the whole West should have done more earlier,” she told the Sunday Express.

“We didn’t do enough as Putin staged invasions into neighbouring countries. There is a great sense of resolve now to take a completely different approach.”

She also said petrol and household energy bills may rise but it is incomparable to the price of not holding Putin to account: “The cost of not stopping him now would be disastrous.”

The so-called Strategic Lawsuits Against Public Participation have previously been used to censor and threaten journalists and activists.

Read more:
Sky News team’s harrowing account of their violent ambush in Ukraine this week
‘Welcome to Hell’ – the message facing Russian invaders as Kyiv prepares for the fight of its life
Exhausted women and children shelter in tents after fleeing Putin’s war

Sir Keir Starmer said: “We are already behind the rest of the world in enforcing sanctions against oligarchs funding Putin’s murderous invasion of Ukraine.

“We can’t then also give room for them to sue their way out of sanctions, while gagging the UK’s media. Lawfare is not the way we do things in this country. The freedom of the British press is to be cherished, respected, and protected.”

Meanwhile, Defence Secretary Ben Wallace has warned President Putin not to underestimate the West as he said if allies stuck together and refused to be intimidated, he was sure the Russian leader would fail in his invasion of Ukraine.

In an interview with The Sunday Telegraph, Mr Wallace said the West “must not be afraid of Putin”, who he said was “acting irrationally and inflicting horrors on Ukraine”.