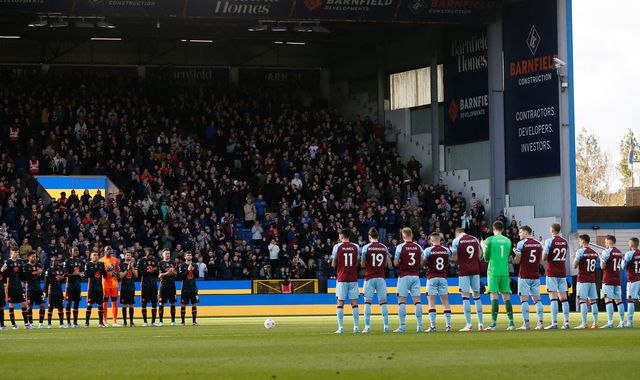 Chelsea’s manager has criticised some of the club’s fans after they chanted for Russian club owner Roman Abramovich during a minute’s applause in support of Ukraine before Saturday’s Premier League game at Burnley.

“We take the knee together [in support of anti-racism]. If an important person from our club or another club unfortunately dies, we show a minute of respect, it is not the moment to give other messages, it’s a moment to show respect.

“We do this because this is what we are, we show respect as a club, and we need our fans to commit to this minute of applause.

“We do it for Ukraine, there is no second opinion about the situation there. They have our thoughts and our support; we should stand together as a club. It’s not the moment for other messages.”

Premier League clubs showed their support for Ukraine in various ways on Saturday following Russia’s invasion of the country.

But videos posted online showed Chelsea fans ignoring the minute’s silence before kick-off to pay tribute to Mr Abramovich, who announced on Wednesday he was selling the club.

The Russian billionaire has funded the Blues since his takeover in 2003, helping Chelsea to win 19 major trophies during his time in charge.

Chelsea face the prospect of their owner being placed under sanctions by the UK government, which is targeting Russian business figures following Russia’s invasion of Ukraine.

Abramovich denies links with the Kremlin or Russian President Vladimir Putin and denies doing anything that would justify being sanctioned.

A Chelsea club spokesperson told Sky Sports News: “The club’s very firm view is that moments of respect or recognition should always be honoured by everyone present.”

“The events happening in the world today do throw football into context,” Mr Pace wrote.

“I want to use this column to again send solidarity and support to the people of Ukraine following the devastating scenes that have been unfolding in the country since the Russian invasion.

“I believe at times like this football has the power to unite and send a clear message.”

The Clarets wore warm-up shirts with the words ‘Football Stands United – No War’ after they welcomed Ukrainians from the local area for their match against Leicester in midweek.

Blue and yellow, the colours of the Ukrainian flag, were also much in evidence at Premier League grounds across the country.