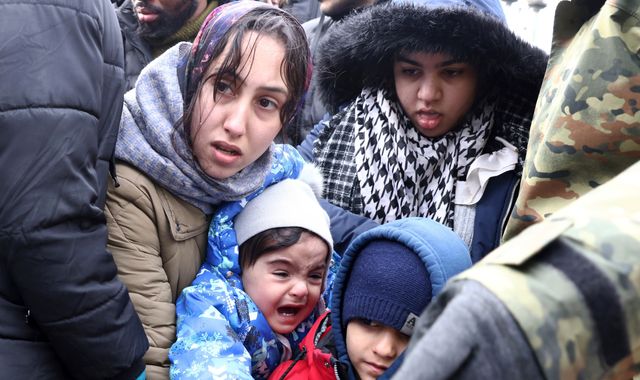 More than 10,000 people have applied for the UK’s Ukraine Family Scheme since Friday.

Under the system, Ukrainian refugees who have family settled in the UK will be able to apply to come to Britain for three years.

The numbers were announced by Home Secretary Priti Patel – on the same day France publicly criticised the UK over its treatment of Ukrainian refugees stuck in the French port of Calais.

French Interior Minister Gerald Darmanin said he had twice contacted Ms Patel and asked her to set up a consulate in Calais.

He claimed many of the hundreds of displaced people arriving at the port had been turned away by British officials who told them to get visas at UK consulates in Paris or Brussels – hundreds of miles away, calling it “a bit inhumane”.

“The British must put their rhetoric into action, I’ve heard the big words of generosity from Mr (Boris) Johnson,” Mr Darmanin said.

But Ms Patel said it was “wrong and inaccurate” and that she had a number of staff in Calais “to provide support to Ukrainian families”.

The spat marked the latest diplomatic row between the two countries following Britain’s departure from the European Union, which has resulted in arguments over how to tackle migrants crossing the English Channel, as well as fishing rights.

Ms Patel told Sky News: “This is the first scheme that is up and running in the world in this short space of time.

“I am surging staff across all application centres across the entire European Union as well as in the border countries such as Poland where huge numbers of people are coming through.”

Mr Darmanin and Ms Patel have clashed in the past over how France and Britain tackle the issue of migrants – many from Africa and the Middle East – risking their lives by crossing the English Channel in makeshift dinghies.

Last November, 27 migrants died when they tried to cross the English Channel in a dinghy.

Campaigners had used as a thrust of their Brexit messaging that leaving the European Union would mean regaining control of borders.