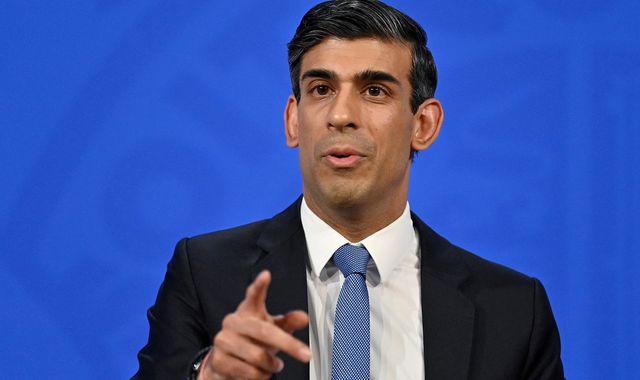 Boris Johnson could increase the defence budget within weeks, amid fears the fallout from the Ukraine crisis will cost the exchequer tens of billions of pounds.

Chancellor Rishi Sunak will deliver the spring statement on 23 March alongside the latest Office for Budget Responsibility (OBR) forecasts, which are published twice a year.

The OBR is widely expected to upgrade its forecasts, giving the chancellor the option to increase public spending while staying within his limits, after the Treasury received almost £9bn more in tax receipts in January 2022 than the previous year.

Two sources have told Sky News that defence spending was the most likely of any budget to rise, with additional money for lethal aid for Ukraine and the potential for increases in other areas of the defence budget in the face of the increased threat to NATO from Russia.

No formal submissions have been made by the Ministry of Defence.

Labour’s shadow defence secretary John Healey told Sky News earlier he expects there to be a “big boost to defence” in the spring statement.

Party leader Sir Keir Starmer has called for a review of defence policy and spending in the wake of Russia’s invasion of Ukraine, saying the conflict has “blown away some of the assumptions the government was working on”.

He told the BBC’s Sunday Morning programme that Labour “wouldn’t have done that”, referring to government plans to cut a further 10,000 soldiers from the army by 2025.

“We’ve said we wouldn’t be making the cuts that the government is currently making,” Sir Keir said.

“But I think in the middle of a conflict, we have to focus on the job in hand, which is supporting Ukraine and ensuring that Putin is defeated.

“In the aftermath, of course, there’s going to have to be a review across parliament about spending, about priorities about strategy in relation to defence.”

(c) Sky News 2022: UK defence budget could be increased in wake of Russia’s invasion of Ukraine