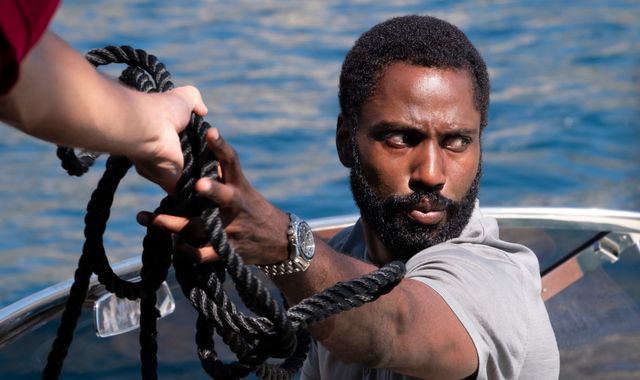 Tenet, the much-anticipated sci-fi thriller from Christopher Nolan, will finally arrive in cinemas across the UK this week after being postponed twice due to the coronavirus outbreak.

Starring Robert Pattinson, John David Washington and Elizabeth Debicki, and thought by some to be a follow-up to the director’s 2010 hit Inception, Nolan‘s film was always going to be surrounded by plenty of hype.

It was originally slated for release on 17 July, but its premiere was delayed following the shut down of cinemas worldwide.

Now, the entire film industry is been holding its breath to see if the first big tent-pole movie of the summer is enough to tempt paying customers back into theatres.

Carol Welch, the managing director at Odeon Cinemas, says the pre-sales are in good shape.

She told Sky News: “We’ve already had thousands of tickets sold to our film fans who are desperate to come back.”

And while Tenet might be the biggest release in months, Welch says it’s not the only film that will entice audiences back into the auditorium.

“I think this is just the first big film, we have lots of other new content… In terms of blockbusters after Tenet we have a really good slate towards the end of the year.

“When you actually come into a cinema experience with no distraction you can escape the everyday life, I think people will always want to do that and so I’m very optimistic moving forward.”

With a spring and summer blighted by a global pandemic, escapism will be top of many people’s to do lists.

Not only is Tenet the first new blockbuster to be screened since lockdown began, it has also broken the international release mould that film distributors have adhered to for years.

While the film will be available from 26 August here in the UK, audiences in two of the world’s biggest movie markets – the US and China – will have to wait a couple more weeks to see the $200m production.

The staggered release has resulted in fears there could be an increase in piracy driven by a combination of impatience from fans and a desire by viewers to stay at home.

Although cinemas have been allowed to open in England since 4 July, some have remained shut, blaming the postponement of big releases, saying it’s not worth them opening if they don’t have something to draw customers in.

And with many studios now having a backlog of blockbusters waiting to be released, Warner Bros, (the studio distributing Tenet) has effectively become canaries in the mine – the first to risk putting something out despite restrictions on cinemas due to the pandemic.

Some distributors have embraced a different approach: on-demand at home viewing.

Disney’s Mulan, which had been slated as the next big release after Tenet, is now skipping a cinema release and going straight to the company’s streaming service Disney Plus.

Film critic Larushka Ivan-Zadeh says apart from being a much-hyped film from a well-loved director there’s another reason Tenet is the right film to tempt people back into cinemas.

“He makes films specifically to be seen on the big screen, and Tenet is meant to have a release that will roll out on 70 millimetre and IMAX, as well as the sort of traditional 35-millimetre format.

“So, it feels symbolically like the film that has to get everyone back into the cinemas.”

Tenet is released in the UK on 26 August and will then show in parts of the US on 3 September, and China on 4 September.