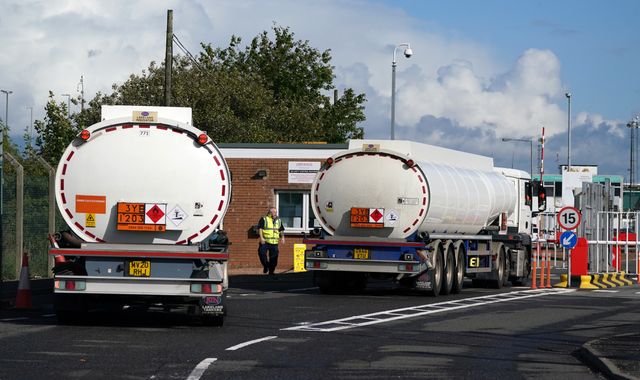 Troops are gearing up to start driving fuel lorries to petrol stations later this week after the Ministry of Defence approved an official request for assistance.

While no final decision has been made on any deployment, Business Secretary Kwasi Kwarteng said the move to place the army on stand-by was a “sensible, precautionary step”.

Some 150 military drivers, each teamed with another serviceperson to keep them company on journeys, will be available to transport fuel around the country if required, a senior defence source said.

Details about where they will be deployed have yet to be revealed.

A second source said it is “highly likely” they will start driving fuel in the coming days.

Industry and the government need to say where the drivers would be most useful.

All the military drivers are HGV qualified but they might need up to three days of extra training to be able to learn how to provide fuel to petrol stations.

The Ministry of Defence received the request for assistance from the business department – known as military aid to the civil authorities (MACA) – on Monday.

It was approved on Tuesday.

The troops have already been put on a higher state of readiness given the fuel crisis.

They will be mobilised under a long-standing contingency plan for fuel shortages called Operation Escalin.

The news comes as the prime minister suggested the situation was improving.

“On the forecourts the situation is stabilising and people should be confident and just go about their business in the normal way,” Boris Johnson said.

“What we want to do is that we make sure we have all the preparations necessary to get through Christmas and beyond, not just supplying the petrol stations but all parts of our supply chain.”