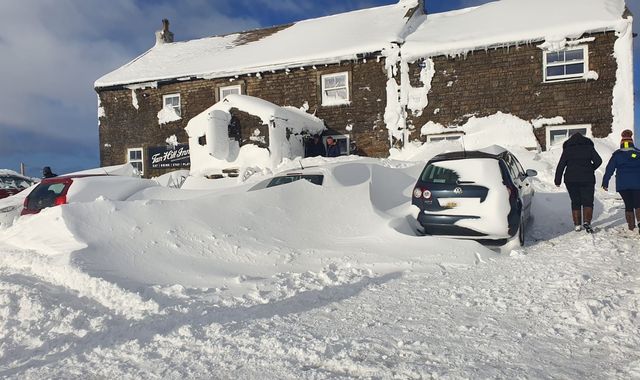 Customers are facing a third night trapped in the UK’s highest pub due to heavy snowfall during Storm Arwen.

Around 60 pub-goers became stranded at the Tan Hill Inn in the Yorkshire Dales after going to watch an Oasis tribute band on Friday night.

Nicola Townsend, the pub’s manager, told Sky News that around 50 guests will be staying for a third night due to the high levels of snow as well as fallen power lines blocking the roads after the storm.

Mountain rescue has helped to remove one person for medical treatment for an existing health condition while a few other people managed to leave in 4×4 vehicles on Saturday night, she added.

“But we’re all sleeping down here again tonight. Nobody else is going anywhere now,” Ms Townsend said. “We’re just going to make sure everybody is safe.”

The pub manager said the snow is up to nine feet deep in some areas and they have been advised not to drive anywhere, especially without a 4×4 vehicle.

Since Friday, the pub have held a pub quiz, played movies, treated their guests to a free buffet and served Sunday lunch with Ms Townsend adding that the pub has plenty of supplies to keep them going.

“We’ve kept the fires roaring. Everyone is nice and warm,” she said, adding that the guests were “still in good spirits” and have made friends with each other.

“Everyone came as strangers on Friday night and I think I speak on behalf of everyone when I say they have made friends here,” she said.

“Our guests have been absolutely amazing – couldn’t have asked for better. They’ve been really patient and really understanding so on behalf of the staff here it’s a big thank you from us all for being incredible.”

The pub has also shared photos on Facebook showing rows of guests sleeping under blankets in one of the lounge areas.

It comes as the snow and aftermath of the storm has been causing widespread disruption across Yorkshire.

North Yorkshire Fire and Rescue Service said they had been called to fallen power cables, in places including Hunmanby, Kilburn and High Birstwith.

At least three people died during the storm on Friday as a result of falling trees.