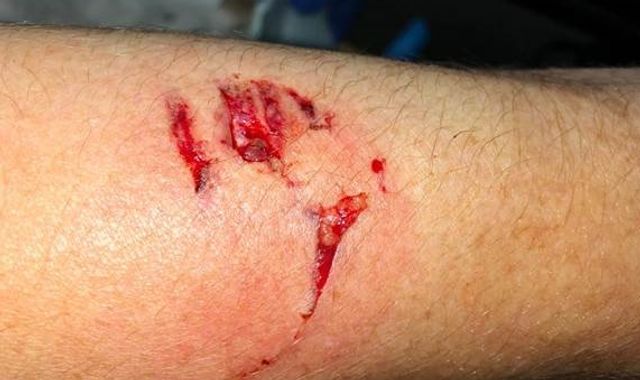 Policewoman needs hospital treatment after being bitten on the arm

A female police officer needed hospital treatment after she was bitten on the arm by a woman who refused to let go.

The officer had to forcibly remove her limb from the woman’s mouth during the attack in Manchester city centre which has been described as “particularly appalling”.

She was one of two officers who were bitten in separate incidents in Greater Manchester on Saturday.

The officer had been approached at around 5.30pm by a member of the public in Piccadilly Gardens who said they had seen two women being aggressive towards each other.

She was bitten on the arm by one of the women as she attempted to separate the pair.

An image shows how the policewoman was left with a serious bite injury on her arm that needed hospital treatment.

A second woman attempted to prevent the attacker from being arrested and kicked out at officers.

The women, both aged 40, were arrested on suspicion of assault of an emergency services worker and remain in custody for questioning.

Officers later attended a property in Reddish Vale Road following a report a man was attempting to break into the address at around 9.45pm.

The man fled from officers before resisting arrest as he allegedly bit one officer and attempted to strangle another.

The man, aged 27, was tasered and taken to hospital as a precaution before being arrested on suspicion of two counts of assault on an emergency worker.

Nick Bailey, assistant chief constable for Greater Manchester Police, said: “It is saddening to have to reflect upon another weekend where our hardworking officers have been assaulted during the course of their duties.

“These attacks are completely unacceptable and I want to make it clear that we will work to ensure that those responsible feel the full weight of the law.

“The first of these incidents was particularly appalling – an officer badly bitten simply for trying to diffuse an altercation between two others.

“I’m sure every right-thinking member of our communities will join me in condemning these assaults.

“Thankfully, none of the officers involved suffered any lasting, serious injuries and I wish them well as they return to duty.”

(c) Sky News 2020: Policewoman needs hospital treatment after being bitten on the arm