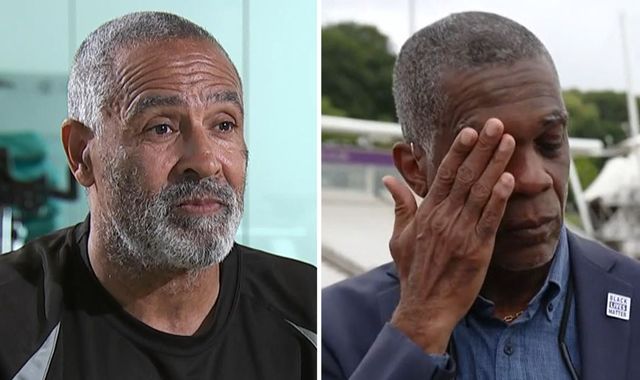 The decathlon champion, who won the top prize at the 1980 and 1984 games, said he “fully supported” the movement, adding if he was competing now he would take a knee or wear a black glove while standing on the podium.

He told Sky News: “I think it’s brilliant that so many people are beginning to stand up against inequality.

“For me, the only real problem is you want it to be something and not just a short-lived thing.”

But he said it was not until Sky Sports pundit Holding talked about Black Lives Matter on air that he fully got to grips with what the movement really meant.

“Black Lives Matter is a cause worth standing up for,” said Thompson.

“I didn’t really understand Black Lives Matter until I heard Michael Holding talking about it.

Holding won praise for the passionate speeches he gave on the first day of England’s test match against West Indies in Southampton last month, where players took the knee in support of Black Lives Matter.

The former West Indies cricketer broke down in tears on live TV and later explained it was because he was thinking about the racism his parents faced when they were younger.

He added: “I hope people understand exactly what I’m saying, and exactly where I’m coming from. I’m 66 years old. I have seen it, I have been through it, and I have experienced it with other people.

“It cannot continue like this – we have to understand that people are people.”

Thompson previously said in an interview with the Sunday Times magazine that he may have experienced negativity throughout his career because of his ethnicity.

He said: “I genuinely don’t recognise the old descriptions of myself that say I was arrogant or rude or difficult. I started competing before the first black person had even played football for England, so maybe subliminally some of the negativity I received was because of the colour of my skin.

“Attitudes were completely different then and in those days we were expected to be seen and not heard.”

Thompson retired from athletics in 1992 after suffering from a hamstring injury. In 2012, he was an ambassador for London’s Olympic games and has since set up his own gym in London – Daley Fitness.

Speaking about next year’s games in Tokyo, which were delayed due to coronavirus, he said he had high hopes for British athletics stars Dina Asher-Smith and Katarina Johnson-Thompson because of their success last year.

Johnson-Thompson also claimed glory at the World Athletics Championships in Doha, winning the heptathlon with a British record of 6,981 points.

Thompson said: “The great thing about both those ladies is they had brilliant years last year and that’s given them the confidence to know that they can compete.

“Now they’ve got an extra year, they’ll be better next year.”