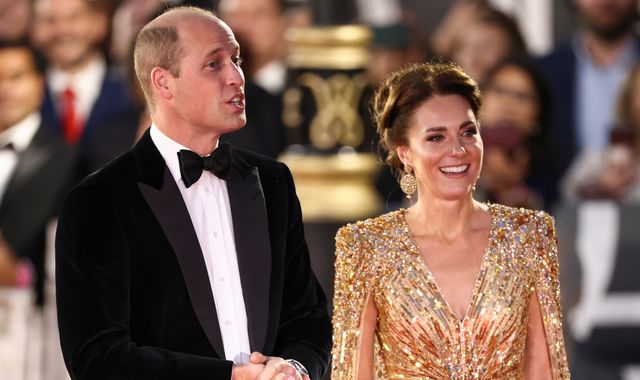 No Time To Die: Royals sparkle at 007 premiere as Daniel Craig says he is ‘greatly relieved’ to be able to finally show new Bond film

Craig told Sky News he is “greatly relieved” to be able to show the new Bond film, No Time To Die, in cinemas.

At the world premiere in London, the James Bond actor said: “We’ve had COVID so everything has to be put into perspective doesn’t it?

“I am greatly relieved: we make Bond movies for the cinema and we’re here and I couldn’t be happier about that.”

The 53-year-old arrived at the premiere in a dark pink suede dinner jacket over a white shirt and black bow tie.

Several healthcare workers and members of the armed forces were joined by the Prince of Wales, the Duchess of Cornwall, and the Duke and Duchess of Cambridge at the premiere.

Charles, Camilla, William and Kate were on the red carpet, along with Craig and other members of the cast, including Rami Malek, Lea Seydoux and Lashana Lynch, at the Royal Albert Hall.

Emma Raducanu, who won the US OPen, left the practice courts behind to attend the star-studded event.

No Time To Die is the 25th Bond film and it will be the final movie featuring Craig as 007.

It has been delayed for more than a year due to the coronavirus outbreak but will be released in UK cinemas on Thursday.

No Time To Die sees Bond enjoying a quiet life in Jamaica having left active service when his old friend from the CIA Felix Leiter, played by Jeffrey Wright, turns up and asks for his help.

A mission to rescue a kidnapped scientist becomes far more treacherous than expected and leads to a mysterious villain armed with dangerous new technology.

For 2015’s Spectre, William and Kate and the Duke of Sussex attended the event.

(c) Sky News 2021: No Time To Die: Royals sparkle at 007 premiere as Daniel Craig says he is ‘greatly relieved’ to be able to finally show new Bond film