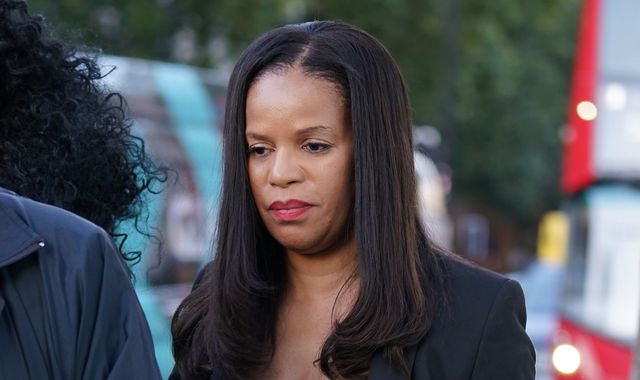 An MP allegedly threatened to send naked pictures of a woman to her family because she was jealous of her friendship with her partner.

Claudia Webbe, 56, allegedly engaged in a campaign of harassment against Michelle Merritt, 59.

Westminster Magistrates’ Court heard that during one call the MP for Leicester East called Ms Merritt “a slag”, threatened her with acid and said she would send naked pictures and videos to her daughters.

Prosecutor Susannah Stevens said Ms Webbe, who now sits in the Commons as an independent after she was suspended by Labour, harassed Ms Merritt because she was jealous of her friendship with her partner, Lester Thomas.

Ms Merritt said she had known Mr Thomas for more than 15 years and they were “good friends”, having previously dated.

The prosecutor said Ms Webbe made several silent phone calls from a withheld number before the “harassment escalated” on Mother’s Day on 31 March 2019.

Giving evidence from behind a screen, Ms Merritt said Ms Webbe told her she was “Lester’s girlfriend” and then “really started shouting, ‘Why are you contacting Lester?’

“She then started calling me a slag and saying friends don’t send pictures of their t*** and p**** to other friends, and it culminated in, ‘You’re a slag and you should be acid’.

“She confirmed she knew where I lived and would send pictures and videos to my daughters.”

Ms Merritt, an executive assistant, said she was left “very shocked and very fearful” and called police, saying: “I have been threatened by a public figure with acid over the phone.”

Ms Webbe continued to make further calls despite being warned by an officer, the court heard, and Ms Merritt recorded one after ringing her back on 25 April last year.

In the call, which was played in court, Ms Webbe repeatedly tells Ms Merritt to “get out of my relationship”.

She also says: “I have seen all of your naked pictures,” adding: “I will show them all of your pictures.”

Giving evidence, she said: “I have never attempted to threaten Michelle Merritt, I have never sought to cause her any anxiety or concern with an actual threat.”

Ms Webbe, who at the time was living with Mr Thomas, denied ever deliberately making silent phone calls from a withheld number.

She also denied making threats in the Mother’s Day phone call, telling the court: “I didn’t do any of that.

“I have never sworn in my life, I don’t use expletives, I would never treat women like that.

“I spent my lifetime campaigning for the rights of women, for challenging this type of behaviour and this is not something that is in my character and not something I would ever do.

“These terms and these words are not my words. I would never, ever use such expletives, such derogatory terms about another person, let alone another woman.”

The case has been adjourned to 13 October, when the trial continues.