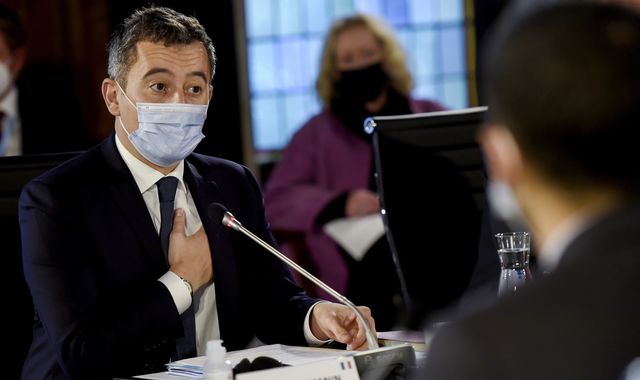 The UK must make itself less economically attractive to migrants, France’s interior minister has said.

Gerald Darmanin added that France would not be “held hostage” by Britain’s domestic politics.

People gather in Calais and Dunkirk because they are “attracted by England, especially the labour market which means you can work in England without any identification”, he continued.

“Britain must take its responsibility and limit its economic attractiveness.

“Britain left Europe, but not the world. We need to work seriously on these questions, without being held hostage by domestic British politics.”

Migration across the English Channel has become an even more pressing issue after 27 people died on Wednesday.

Mr Darmanin was speaking following a meeting in Calais with his counterparts from Germany, Belgium and the Netherlands – to which Home Secretary Priti Patel was disinvited on Friday.

Mr Darmanin said, however, that while Sunday’s gathering had been “pro-European”, it was not “anti-English”.

“We want to work with our British friends and allies,” he said.

Following the meeting, the European Border and Coast Guard Agency agreed to provide a plane – from Wednesday – to monitor France’s northern coastline.

Governments need to “go after the money”, she added.

Ms Patel was excluded after Paris reacted with dismay to a letter from Boris Johnson containing a five-point plan to tackle the number of people trying to cross the English Channel.

But French government spokesman Gabriel Attal said the note was “formally poor and its content inappropriate”.

Earlier, it emerged that the Dutch and UK governments had agreed that migrants need to be returned to the first safe country they arrive in.

The Home Office said in a statement that Priti Patel spoke to the Netherlands’ minister for migration, Ankie Broekers-Knol, on Sunday morning about people crossing the Channel in small boats.

Ms Brokers-Knol was among those attending the meeting on Sunday afternoon.

The Home Office statement said Ms Patel and her Dutch counterpart agreed that last week’s “tragic incidents” demonstrated the “need for European partners to work together”.

“It was clear that shared problems needed shared solutions,” it continued.

“The Home Secretary expressed that it was unfortunate that she wouldn’t be present at today’s meeting of interior ministers to discuss this issue.”

They talked about ideas for tackling the criminal gangs orchestrating the journeys “through shared intelligence and joint law enforcement initiatives”.

People gathered on the beach in Folkestone on Sunday where a bell was rung 27 times in memory of those who died this week.

They also called for safe routes for asylum seekers, writing in the sand: “Safe routes now.”

On Sunday morning, Health Secretary Sajid Javid said the government is hoping the French will work with the UK on halting migrant crossings despite being disinvited from Sunday’s talks.

He told Sky News’ Trevor Phillips On Sunday: “We can’t just do it on our own, we do need the co-operation of the French and again, you asked me about the prime minister’s letter and I think what the prime minister has set out, those are exactly the kind of things that we need to do and I hope that the French will take that and work with us.”

Labour criticised both the UK and French governments, with shadow foreign secretary Lisa Nandy saying they are “engaging in a blame game while children drown off our coastline”.

She told Phillips: “It’s just simply unconscionable and any responsible government on either side of the Channel would set aside those differences and work together to deal with what is a collective shared problem that will only be solved together.”