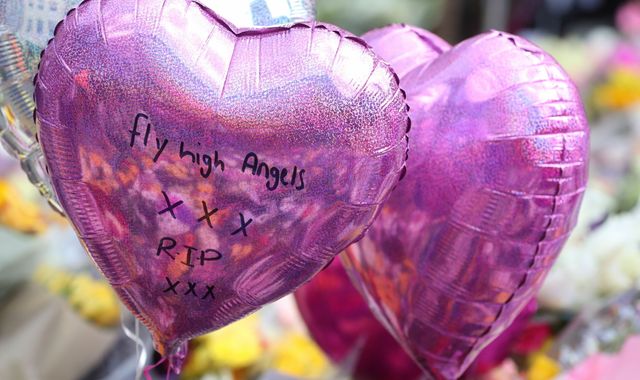 Manchester Arena terror attack inquiry: Who were the victims?

Thousands of young people and parents were attending a sold-out Ariana Grande concert when it was targeted by a terrorist in May 2017.

A public inquiry is due to begin on Monday into the attack at the Manchester Arena – which claimed the lives of 22 people, the youngest only eight years old.

Here are the victims of the bombing.

The 15-year-old schoolgirl from Liverpool was the last victim to be named.

She reportedly went to the concert with her older brother, who was seriously injured.

A relative said Megan’s parents were “destroyed beyond words”.

“It doesn’t seem fair for two kids to go to a concert and only one returns how in God’s name could this happen to such a lovely family…heartbroken,” they wrote on Facebook.

Courtney, 19, and her stepfather Philip, 32, from Gateshead, had been at the Ariana Grande concert together.

Courtney’s mother Deborah Hutchinson said: “My stunning, amazing, beautiful daughter, you were my rock you made me so proud with all you had achieved and my gorgeous, crazy Philip, you made my world a happy place and now you are both my angels flying high in the sky.”

Mr Tron’s mother said: “Philip was such a fun-loving, energetic soul, he would light up the darkest room and lift your spirits with his infectious laugh, witty sense of humour and his beautiful smile.”

The off-duty police officer with Cheshire Police was at the concert with her family.

In a statement issued through Greater Manchester Police, her family said: “Elaine was a much loved daughter, sister, Auntie, friend and colleague, the best we could ever have wished for.

“She was everyone’s friend, thoughtful beyond belief with an effervescent and outgoing personality…

“Elaine just loved life, and had a major love of music. Despite what has happened to her, she would want us all to carry on regardless and not be frightened by fear tactics, instead she regularly urged us all to rise up against it.”

The death of the 50-year-old from Otley, West Yorkshire, was confirmed after a frantic search.

Ms Fawell was reported to have been about to leave the concert with her 15-year-old daughter Charlotte, along with a friend and her sons, when the bomber struck.

Staff at the primary school where she used to work, St Oswald’s C of E Primary School, in Guiseley, said on Twitter at the time: “It is with deepest sadness that I confirm that our former colleague Wendy Fawell was killed in the Manchester bombing. RIP, Wendy.”

The 14-year-old from the Isle of Barra in the Outer Hebrides was at the concert with her friend Laura MacIntyre, who was seriously injured.

The trip was a treat to celebrate Eilidh’s birthday and was her first concert.

Eilidh’s mother, Marion, received a text message from the pair to say the last song had started and they would be leaving soon, but when she arrived at the arena she was unable to find them.

Her parents said in a statement: “Eilidh was vivacious and full of fun. She loved all music whether it was listening to Ariana or playing the bagpipes with her pipe band.”

Chloe Rutherford, 17, and Liam Curry, 19, were a young couple from South Shields.

After travelling to Manchester to search for the teenagers and circulating their picture on social media, their parents later paid tribute to the “inseparable” pair, calling them “beautiful inside and out”.

In a statement, their family said: “They were perfect in every way for each other and were meant to be.

“They lived to go to new places together and explore different cities. They wanted to be together forever and now they are.”

The 14-year-old, from Leeds, was among the fatalities. Her mother Samantha and grandmother Pauline were also injured in the attack.

Her grandfather said in a statement: “Sorrell was only 14 but she was our rock, she kept us all grounded. She was such a clever, talented, creative girl, there was nothing she couldn’t do.

The mother of three, from Lancashire, had been at the concert with her young daughter, who survived the attack.

Her family said they were “absolutely devastated” by Michelle’s death, adding “we hope to draw from the courage and strength she showed in her life to get through this extremely difficult time”.

Jane Tweddle (far left) was 51 years old and a mother of three. She worked as a receptionist at the South Shore Academy in Blackpool.

She was at the arena waiting for a friend’s daughter when the blast happened.

Her statement added: “She is irreplaceable, much loved and will never be forgotten.”

Nell Jones was 14 and a Year 9 student at Holmes Chapel Comprehensive School in Cheshire.

Her family had been searching for her after the attack in the hope they would find her in hospital, but were later told she had died at the scene.

Her brother, Sam Jones, said she was “everything you’d want in a sister – she was fantastic, funny, irritating, we miss her cuddles”.

Martyn Hett was 29 and a Coronation Street super-fan.

Russell Hayward wrote on Twitter: “Our wonderful, iconic and beautiful Martyn didn’t survive. He left this world exactly how he lived, centre of attention … I love you Martyn. I always will.”

Mr Hett was was also a huge fan of Mariah Carey, who said on Instagram she was “devastated” to hear of his death.

In the year before his death, he had encouraged people around the world to flock to his mother’s online knitting shop after he told his Twitter followers she had not sold a thing at a craft fair stall.

The Polish couple, from York, had been at the venue to collect their daughters.

Taxi driver Marcin, 42, and his wife Angelika, 39, left behind their two daughters who were aged 13 and 20 at the time.

The couple’s family said they were “grateful” for messages of support they had received.

Alison Howe, 45, from Royton, Greater Manchester, and her friend Lisa Lees, 43, were killed as they waited for their children to come out of the concert.

On Facebook, Mrs Howe’s stepson Jordan said: “They took a caring beautiful mum and step mother away from us all she was amazing to us all x love you loads.”

Lisa’s brother, Lee Hunter, said: “For those who don’t know Lisa is gone but never ever forgotten I love you Lisa I’ll miss you so much.”

Kelly Brewster, 32, from Sheffield, was at the gig with her sister and 11-year-old niece Hollie, who survived.

Family members said she had died while shielding her niece from the blast.

Confirming her death, her partner Ian Winslow said: “Kelly really was the happiest she has ever been and we had so many things planned together … Love you loads.”

Olivia, from Bury, Greater Manchester, was one of those unaccounted for following the attack, and her family had made a desperate appeal for information about what happened to the 15-year-old.

She was at the concert with her friend Adam, who was seriously injured.

Her death was confirmed by her mother Charlotte, who wrote on Facebook: “RIP my darling precious gorgeous girl Olivia Campbell taken far far to soon go sing with the angels and keep smiling mummy loves you so much.”

Olivia was a student at Tottington High School, and the headteacher said: “As a school community we are absolutely devastated and heartbroken at the news that Olivia has passed away. Olivia was a delightful young girl in Year 10, and will be dearly missed.”

Greater Manchester Police confirmed John Atkinson, a 26-year-old from Bury, was among those killed.

Loved ones described him as a “beautiful soul” and a “true gentleman”.

Hayley Dickenson, who organised a fund for his family members, said: “John was one in a million and loved by so many.”

Saffie was the youngest victim of the attack and was at the concert with her mother and older sister.

She had been given the tickets by her parents for Christmas.

The eight-year-old, from Leyland in Lancashire, was described by her father as a “stunning young lady” and a “superstar in the making”.

Her headteacher, Chris Upton, described her as “simply a beautiful girl” – and said her death had come as a “tremendous shock” to all at Tarleton Community Primary School.

Georgina, who was 18 and from Chorley, Lancashire, was the first victim to be named.

She was a super-fan of Ariana Grande who had posed for pictures with the American pop star in the past.

A day before the concert, she had tweeted Grande and said: “SO EXCITED TO SEE U TOMORROW.”

She was a student at Runshaw College in Lancashire, where she had been studying health and social care.