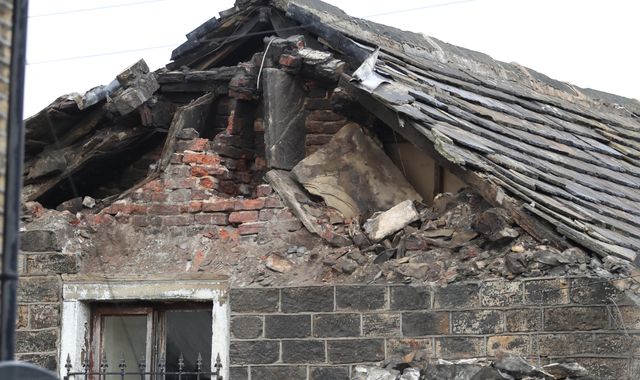 A 47-year-old man has died after a chimney reportedly collapsed on to the roof of his house, with debris falling into the bedroom.

Neighbours said they heard a “loud bang” and screaming in the early hours of the morning on Knight’s Fold, in the Great Horton area of Bradford.

Emergency responders were called to the house shortly after 5am on Sunday.

The victim’s 28-year-old partner was taken to hospital after she suffered non-life-threatening injuries.

A family from the neighbouring house – including three children – were unharmed.

Photos from the scene show the roof partially caved in with bricks scattered about.

Paul Wright, 30, who lives in nearby Southfield Lane, said he was woken up by the noise of the room collapsing and heard the woman screaming.

“At about half past four this morning I heard a big, loud bang, like an explosion,” he said.

“I came out with my partner to see what had gone on and noticed one of the neighbour’s roofs had collapsed and then noticed all the emergency services come.

“It’s a big tragedy to all the neighbours, what’s gone on, it’s just a big shock to everybody.”

Mr Wright described how it had taken over an hour to get the woman out of the house and emergency responders had to remove a window.

He added the couple were “lovely people” who “kept themselves to themselves”.

“I’d only seen them a few times when they were walking their dogs but to me they just seemed nice, pleasant people and it’s just a big shock what’s happened,” he said.

Another neighbour, Simon Gott, 22, said the woman rang his mother shortly after the incident.

“She rang my mum 10 minutes after it happened but my mum was asleep, so she must have been scared,” he said.

Iqbal Zahir, who also lives nearby, said he had opened his window and looked around after hearing a “big bang”.

“It’s really sad. It was the chimney, they need repairing, these are old houses,” he said.

It is believed the chimney fell from an adjoining two-storey home and through the roof of the couple’s single-storey home.

Building control surveyors were at the house on Sunday and the home’s windows and doors were boarded up.

The victim’s family are being rehoused and road closures are in place until the end of the day.

“Work is ongoing to make the building safe and we are in the early stages of a full investigation with the local authority to determine exactly how this fatal incident took place,” she said.

“A full file will be prepared for the coroner.”