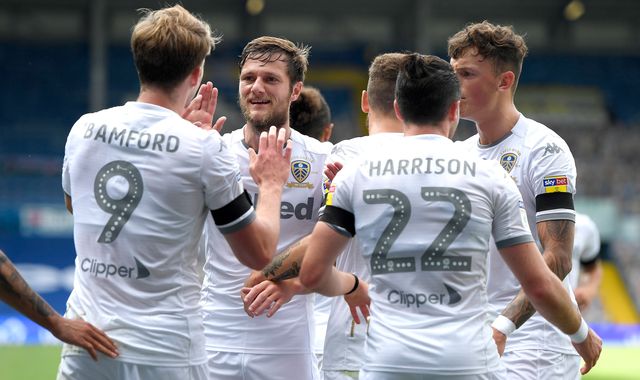 Leeds United have been promoted to the Premier League – ending a 16-year wait for top-flight football.

Marcelo Bielsa’s side sealed promotion from the Championship with two games to spare, after West Brom failed to beat Huddersfield.

Leeds have enjoyed an impressive campaign after bouncing back from last season’s play-off heartache to clinch promotion, returning to the top flight for the first time since 2004.

In that time there have been several near misses, while they also spent three years in League One between 2007 and 2010.

While the club has yet to clinch the Championship title, they will do so if Brentford fail to win at Stoke on Saturday.

Even if the Bees are victorious, a draw at Derby in Leeds’ game on Sunday will be enough.

Leeds appeared certain for promotion in early March, when a fifth straight win saw them move seven points clear of Fulham in third, with just nine games to go.

But their future was thrown into doubt when the coronavirus crisis put football on hold indefinitely, and the club were left to wonder whether or not the season would restart.

When football did return more than three months later, Leeds lost to Cardiff in their first game back.

But five wins from six since then ensured they got the job done.

Leeds have not been out of the top five all season and have occupied an automatic promotion spot since November.

“When I played that last game in 2004, 16 years ago, you never envisaged that Leeds United would be out of the top flight for so long, and even dropping to the third tier of English football.

“From what Marcelo Bielsa inherited two-and-a-half years ago – a team that finished 14th in the Championship – to now automatic promotion to the [Premier League], it’s absolutely fantastic.”