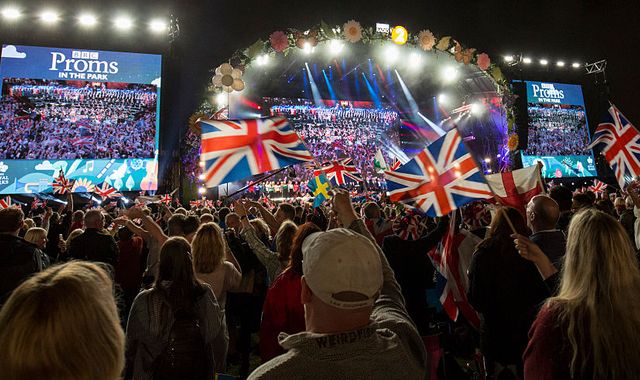 Last Night Of The Proms: Rule Britannia and Land Of Hope And Glory face the axe

The Last Night Of The Proms could be facing a dramatic shake-up, with traditional anthems including Rule Britannia and Land Of Hope And Glory apparently under threat.

The culmination of the annual celebration of classical music is normally watched live by more than 6,000 fans (over 1,000 of them standing shoulder to shoulder) – but coronavirus means it will take place without an audience this year.

Both songs are favourites for Prom fans, who often enthusiastically wave flags and sing along – but according to The Sunday Times, BBC producers are currently in discussions about removing them from the setlist.

The debate is understood to have been initiated by the Black Lives Matter movement, with bosses reconsidering the songs’ inclusion because of their perceived association with colonialism and slavery.

The Proms were founded in 1895, and the BBC has run the concerts since 1927. Broadcast on TV, radio and iPlayer, the final night normally attracts tens of millions of viewers and listeners around the UK.

A spokeswoman for BBC Proms told Sky News: “We are still finalising arrangements for the Last Night of the Proms so that we are able to respond to the latest advice in regards to COVID-19 and deliver the best offering possible for audiences.”

She added: “Full details will be announced nearer the time of the concert.”

Aside from the debate over content, this year’s concert is likely to be a pared-back event in contrast to previous years.

Social distancing measures mean the orchestra – which is normally made up of about 80 musicians – could be reduced to just 15 on the stage at one time.

More than 100 singers normally perform Rule Britannia, but this is likely to be logistically impossible this year.

New Year favourite Auld Lang Syne is normally sung by the audience itself, so could be another song missing from the finale.

The majority of the 2020 Proms season will be made up from highlights from the BBC’s archive, but two weeks of live shows will take place at The Royal Albert Hall from Friday 28 August.

Live performers at the concerts include violinists Nicola Benedetti and Alina Ibragimova; the cellist who played at Prince Harry and Meghan’s wedding Sheku Kanneh-Mason and his pianist sister Isata Kanneh-Mason; and sitar player Anoushka Shankar with electronic artist Gold Panda.

The Last Night of the Proms is on Saturday 12 September.

(c) Sky News 2020: Last Night Of The Proms: Rule Britannia and Land Of Hope And Glory face the axe