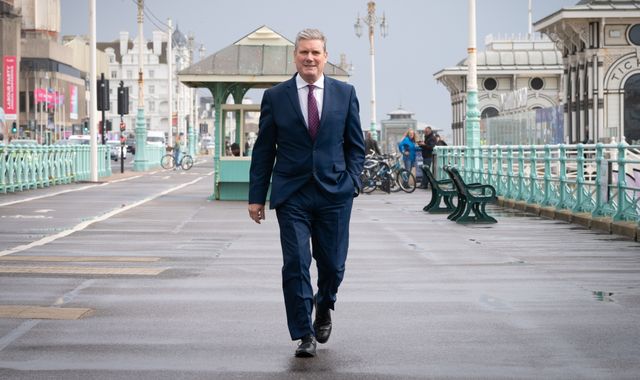 Sir Keir Starmer has repeatedly refused to say if he is moving Labour away from the left to the centre of British politics, but insisted: “You can’t lose four elections and not change”.

The Labour leader told Sky News’ political editor Beth Rigby that the change to the party during this week’s conference in Brighton had been “profound”, following his efforts to alter Labour’s internal rulebook.

And he admitted that he and Labour deputy leader Angela Rayner – who was criticised this week for calling Conservative ministers “scum” – have “disagreements” amid their “different approaches and different styles”.

The first few days of Labour’s gathering in Brighton were dominated by a row over Sir Keir’s efforts to change the party’s rules on leadership elections, with him accused of attempting to freeze out the party’s left-wing from future contests.

And Sir Keir was also rocked by the resignation of shadow minister Andy McDonald over a row about whether the party should back a minimum wage of £15 per hour.

Sir Keir denied he was pleased to see Mr McDonald – who had been among the last remaining supporters of his predecessor, Jeremy Corbyn, in the shadow cabinet – announce he was leaving Labour’s top team.

But he said: “I don’t want to have a discussion about Andy McDonald, I want our party to be focussed on the country.

“The change this week has been profound for our party.”

Subscribe to the All Out Politics podcast on Apple Podcasts, Google Podcasts, Spotify, Spreaker

And on his battle to change Labour’s rulebook, Sir Keir added: “A lot of people said to me ‘why are you doing this Keir? Are you going to get it over the line?’.

“I took a lot of criticism, but we stuck with it because it was a tough decision that had to be taken.

“You can’t lose four elections and not change, and we’ve changed.”

However, pressed on whether the Brighton gathering had shown how he was moving Labour away from Mr Corbyn’s leftist agenda, Sir Keir repeatedly refused to engage with the suggestion he was positioning his party closer to the centre of British politics.

“I want to move the party to a position where it focuses on what matters to working families,” he said.

“Let me tell you what that is, that is a decent education for every child, it is secure work, well-paid work near where people live, it is a health service that works for people where they need it and security.”

As well as Mr McDonald’s resignation, Sir Keir and his allies have also been forced to field questions about Ms Rayner’s description of Conservatives as “scum” to Labour activists during a conference rally.

Asked if this hindered his efforts to win back former Labour voters who backed the Tories in recent elections, Sir Keir said: “I wouldn’t use language.

“Angela Rayner and I have different approaches and different styles.

“It’s not language I would have used. Angela and I talk everyday – of course we have huge agreements and disagreements.”