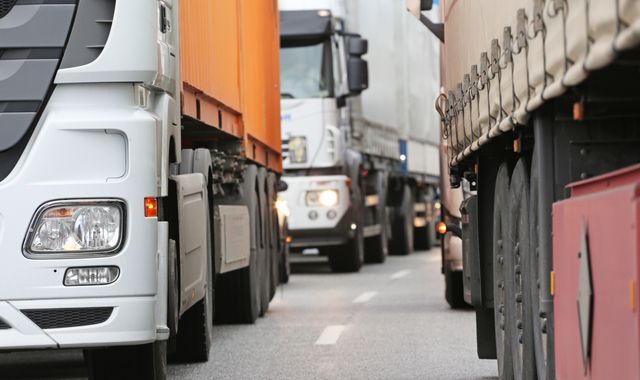 The government is believed to be considering bringing forward a review of its Shortage of Occupation list to tackle the shortage of HGV drivers.

A review of the list, which sets out jobs where overseas workers can apply for visas, is not due until 2022.

But reports suggest proposals to bring forward the review to ease supply chain issues are being considered.

At present, HGV drivers are not on the list.

It comes as some supermarkets and suppliers are struggling to meet demand after many HGV drivers from EU countries left the UK during the coronavirus pandemic and have not returned.

Nando’s had to deal with a shortage of chickens due to a combination of not enough drivers and fewer staff working in meet factories, and McDonald’s earlier this week said it had run out of milkshakes and bottled drinks.

KFC and Greggs have also been impacted.

Retailers including Amazon, Tesco and Marks & Spencer have introduced incentives to entice people to drive for them, such as signing-on bonuses.

And some supermarkets have warned prices in stores could go up as drivers wages rise.

The PA news agency reported that several government departments are liaising over the supply chain issues but that there has been “a lot of pushback” from the Home Office.

Government officials are said to be working closely with the DVLA to increase the number of driving tests taking place to allow more individuals to be recruited.

Driving test centres came to a standstill for much of last year during the peak of the pandemic.

The government have also increased funding for apprentices to get more workers into the industry.

“We recently announced a package of measures to help tackle the HGV driver shortage, including plans to streamline the process for new drivers to gain their HGV licence and to increase the number of driving tests able to be conducted.

“However, most of the solutions are likely to be driven by industry, with progress already being made in testing and hiring, and a big push towards improving pay, working conditions and diversity.

“We want to see employers make long term investments in the UK domestic workforce instead of relying on labour from abroad and our Plan for Jobs is helping people across the country retrain, build new skills and get back into work.”

(c) Sky News 2021: Government believed to be looking at measures to tackle shortage of HGV drivers amid supply chain issues