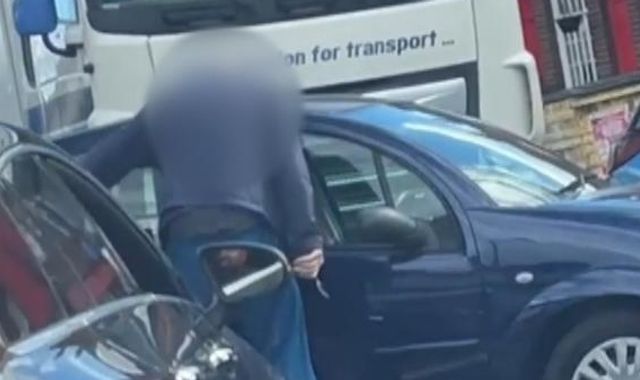 A man appeared to pull a knife on a driver who tried to jump the queue at a London petrol station, a witness has told Sky News.

Stefan Silva filmed the violent interaction as it unfolded before stepping in to calm the angry man down.

The 29-year-old said he had been queuing at a Shell garage in Welling, London, for about half-an-hour when a blue Citroen tried to push to the front of the queue at around 1.30pm on Monday.

“So he quickly pushed in.”

A man – who had been a passenger in another car – walked up to the vehicle and appeared to pull out a knife, before being thrown on the bonnet of the car as it lurched forward.

After it came to a stop he kicked both wing mirrors off the car while threatening the driver that he was going to “stab him”, Mr Silva said.

“He was banging on the side of the car and when he went to the front of the car the old man in the car tried to run him over. So he mounted the bonnet.

“After that he was still banging on the blue car but it wasn’t going anywhere because of the traffic.”

Mr Silva, an engineer from Kent, called the man over to try and calm the situation – telling him it was “not worth it for a bit of fuel”.

The man then left after being told the police had been called.

The driver told Mr Silva he had been trying to fill up his car since 8am, but had been told to come back after 1pm once there had been a delivery: “He told me he was on his reserve, but I said it is probably the same for everyone else who had been queuing up.”

The Metropolitan Police told Sky News: “Police were called at 14:37hrs on Monday, 27 September to reports of a disturbance involving two motorists outside a petrol garage in Bellegrove Road, Welling.

“Officers attended and found no trace of either vehicle. No injuries were reported and no suspects were identified.

“We are aware of footage online which appears to show the incident and will review this as part of our ongoing enquiries.”