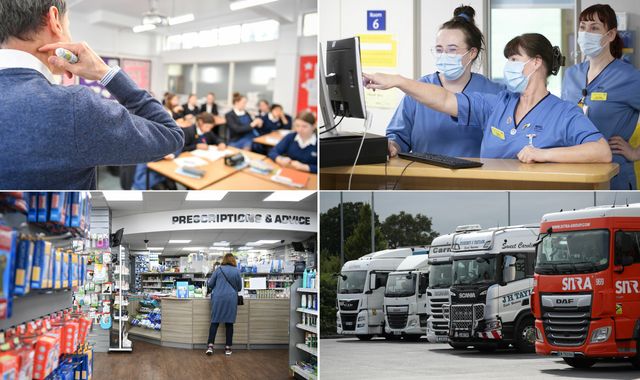 Fuel crisis: Calls for key workers to be prioritised – but who should be front of the queue?

The government is facing calls to prioritise essential workers as some petrol supplies run dry amid impacts of a shortage of lorry drivers.

Long queues were reported overnight and some petrol brands are seeing as many as 90% of their sites running dry, according to the Petrol Retailers Association.

Union Unison said that key workers should not be left stranded or forced to queue for hours for fuel, and called on the government to “designate fuel stations for the sole use of key workers”.

“Essential staff must be able to get to their jobs so they can continue to provide the services so many rely upon”, said the union’s general secretary Christina McAnea.

“Ambulance crews, nurses, care workers, teaching assistants, police staff and other key workers mustn’t be left stranded or forced to queue for hours simply to get to a pump.

“The government could solve this problem now by using emergency powers to designate fuel stations for the sole use of key workers.”

But what difficulties are essential workers experiencing?

Healthcare and essential workers should be given priority access to fuel, the British Medical Association has said.

Dr Chaand Nagpaul, BMA council chair, said healthcare workers should be prioritised to guarantee care to patients. He said “there is a real risk that NHS staff won’t be able to do their jobs”.

“While the government has said it is putting plans in place to alleviate the shortage of HGV drivers to transport fuel, the results of this won’t be immediate,” Dr Nagpaul added.

“Healthcare and essential workers must therefore be given priority access to fuel so they can continue their crucial work and guarantee care to patients.”

Earlier, a campaign group called EveryDoctor, which has 1,700 members, had reported that some healthcare workers were unable to get to work and said the government should clarify its plan “to ensure that all NHS staff can reach their workplaces safely during this fuel crisis”.

Get in touch: If you’re struggling to get fuel we want to hear from you. Send us a photo of queues or closed petrol stations if you can do so legally and safely, along with details of how it’s affecting you, your name and location. Email news@skynews.com with the subject line ‘blog’.

The Royal College of Nursing said health and care workers need to be prioritised or patients could be at risk.

RCN England director Patricia Marquis said: “Nursing staff do valuable work, often travelling long distances to get to work or see their patients in the community.

“Health and care services, already struggling with widespread staffing shortages, cannot afford to lose any more staff because they’re unable to travel. We already know some nursing staff are warning their employers they may not be able to attend tomorrow to ensure shifts can be safely staffed.

“In light of these supply problems, health and care workers need to be a priority or patient care will be compromised.”

John Apter, National Chair of the Police Federation of England and Wales said the panic buying was putting a strain on policing.

He said: “Police officers are having to attend petrol stations to ensure people are behaving sensibly. They also must get to and from their place of work, and this is being increasingly inhibited as they struggle to fuel vehicles.

“The government needs to give urgent consideration as to how my colleagues and other emergency workers can get the fuel they need to travel to work and do their job.”

The Homecare Association is calling for urgent prioritisation of homecare and other essential workers on garage forecourts.

Jane Townson, chief executive of the Homecare Association, said: “There is only patchy prioritisation of essential workers.

“In previous fuel strikes, local authorities have been able to arrange for scarce fuel to be prioritised for essential users.

“There is a question whether this needs authority from central government, under civil contingencies legislation, to address the current problem. We call for this issue to be resolved urgently, as homecare workers need a fast solution so they can get to people who rely on their vital help.”

“The lack of communication from government is not helping.”

What about other workers?

The petrol pumps crisis has presented another problem for the beleaguered meat industry as key staff, such as meat inspectors and vets, are starting to have trouble getting to different sites.

It’s another headache for the sector which has already been hit by a shortage of CO2 – used for stunning animals before slaughter and vacuum packing – and an exodus of foreign workers at abattoirs.

The British Meat Processors Association said the latest problem had so far not caused any plants to shut completely but it was “monitoring the unfolding situation very carefully”.

A spokesperson for the group said: “Apart from the obvious logistics problems with getting deliveries of product between plants and into supermarkets, which many manufacturers are facing, the meat industry has additional but less obvious vulnerabilities to the fuel shortage.

“There are a number of critical workers whose presence is relied on to keep meat factories running. Meat inspectors are the people who physically stamp every carcass to denote that it is fit for human consumption so it can enter the food chain. Vets must be present to inspect operations from an animal welfare perspective and also sign off critical documentation to certify standards are being met.

“The people who perform these roles often work across multiple meat plants over a wide geographic area. If either of these roles are absent due to their inability to get petrol and travel to the sites, production instantly slows down in direct proportion to the time they’re not able to work.

“We have heard reports from a couple of companies already that they’re missing some of these key workers. So far it has not caused any plants to completely shut but we are monitoring the unfolding situation very carefully.”

Paul Whiteman, general secretary of school leaders’ union NAHT, said: “The last thing we need is further disruption to education given the experience of the last 18 months.

“Schools are still grappling with the ongoing challenges caused by COVID-19, and so we hope any further disruption caused by petrol supply problems can be avoided.”

The Royal Pharmaceutical Society said that pharmacies are still getting deliveries of medicines and told people to collect their prescriptions as normal.

Professor Claire Anderson, president of the society, said: “As normal, pharmacists are working with patients to ensure they get the medicines they need. We’re not aware that the problems with fuel supplies are stopping patients getting their medicines.

“If you have any concerns then please speak to your local pharmacist and their team, who will be able to help and reassure you.”

Travelhire Group, which runs Brunel and Green Tomato cars, warned of “a sizeable portion of delays to bookings” in the coming days and warned customers to allocate time for delays.

The organisation said: “In order to control fuel consumption and minimise the risk of vehicles becoming stranded, there are some long-distance bookings which we will not be able to honour. We will contact customers individually about any such bookings.

“We are encouraging customers to share bookings where practical (up to 3 passengers in one car). Where people carriers are booked, there may be times we need to send two cars instead.”

Edmund King, AA president, said: “Millions of drivers changed their refuelling habits this weekend, but once a tank is full it can’t be topped up. This short-term increase in demand should slow and allow forecourts time to restock. We anticipate things will return to normal within the coming days.

“Drivers also need to be careful because this weekend we have seen a dramatic rise in misfuelling (putting in the wrong fuel) compared to last weekend. This in turn unnecessarily reduces the fuel available as the whole tank has to be drained before refilling with the correct fuel.”

(c) Sky News 2021: Fuel crisis: Calls for key workers to be prioritised – but who should be front of the queue?