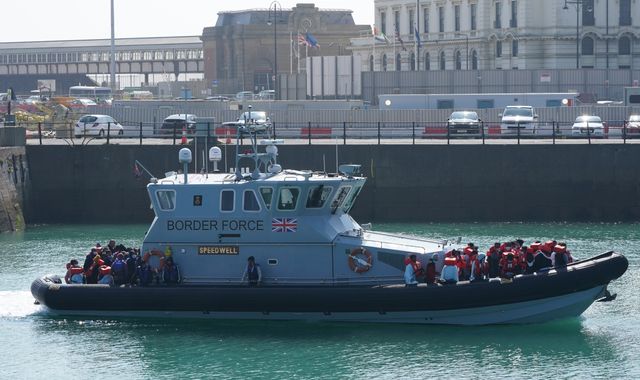 Four toddlers and a baby were among the first group of migrants to be brought ashore to Dover on Sunday following two weeks of poor conditions.

Channel crossings are thought to have resumed on Sunday for the first time since 21 August, when a record 828 migrants arrived in one day.

Dangerous weather conditions had put a temporary stop to boats arriving from Europe.

But Border Force officials were seen rescuing large groups of people from small boats and taking them on larger vessels again today.

A child’s cries were heard as the group were taken off the boat and led along the quayside to the Home Office immigration centre in Dover.

It is not yet known where the migrants have travelled from.

Home Office data shows that more than 12,400 people have already made the dangerous journey across the Channel to the UK this year.

And with warm weather expected in the South East over the coming days, that number is expected to rise even further.

She wants to increase prison sentences for illegal migrants, and for those who “facilitate” crossings to get a life sentence.

The government is also encouraging people to claim asylum in the first “safe country” they reach, instead of making the dangerous crossing to the UK in pursuit of a better life.

But despite claims of enhanced patrols and intelligence sharing with France, Belgium and other European countries, ministers have failed to bring the numbers down.

Since the beginning of 2019, more than a dozen people have died or gone missing trying to make the trip.

Last month, a 27-year-old man from Eritrea died after he and four others jumped overboard as their boat started to sink in the Channel.