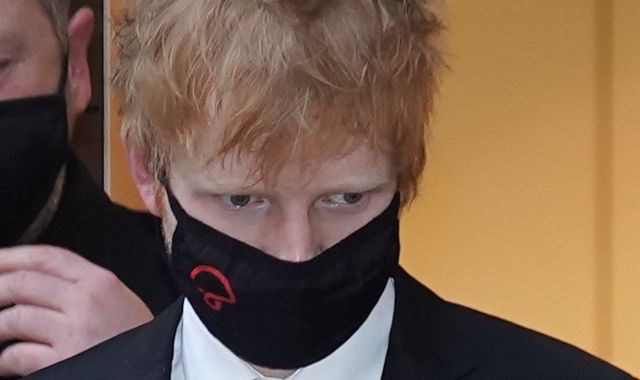 Ed Sheeran copyright row: Singer in court to defend Shape Of You after songwriters claim it’s a rip-off

Ed Sheeran has appeared at the High Court for the start of a three-week legal battle over the copyright of his song Shape Of You.

The 31-year-old singer-songwriter is in a dispute with two musicians who claim his 2017 hit rips off parts of their song Oh Why, which was released in March 2015.

Sami Chokri (a grime artist who performs under the name Sami Switch) and Ross O’Donoghue allege it infringes “particular lines and phrases” of their composition.

The two songs in question share a similar refrain and melody.

Sheeran was pictured arriving at Court 15 of the Rolls Building in central London on the first day of the case, wearing a dark suit and tie.

The star has previously tried to put a stop to the row, issuing legal proceedings in May 2018, asking the High Court to declare that he and the song’s co-authors had not infringed Mr Chokri and Mr O’Donoghue’s copyright.

However, two months later, in July 2018, Mr Chokri and Mr O’Donoghue issued their own claim for “copyright infringement, damages and an account of profits in relation to the alleged infringement,” according to the latest ruling.

It’s a case in which the stakes are high. In a November 2020 ruling, Judge Francesca Kaye said the parties involved “anticipated that they would incur costs in the region of £3m between them on this dispute”.

Shape Of You appeared on Sheeran’s album Divide ÷ which was released in 2017, with his team saying the track was written in October 2016.

The tropical house tune was a worldwide hit and the most streamed song in the history of Spotify. It was also the best-selling song of 2017 in the UK.

Subscribe to the Backstage podcast on Apple Podcasts, Google Podcasts, Spotify, and Spreaker

Sheeran has since become one of the world’s best-selling musicians.

The copyright hearing is taking place before Mr Justice Zacaroli and is expected to last three weeks.

It is not yet known on which days Sheeran will be giving evidence.