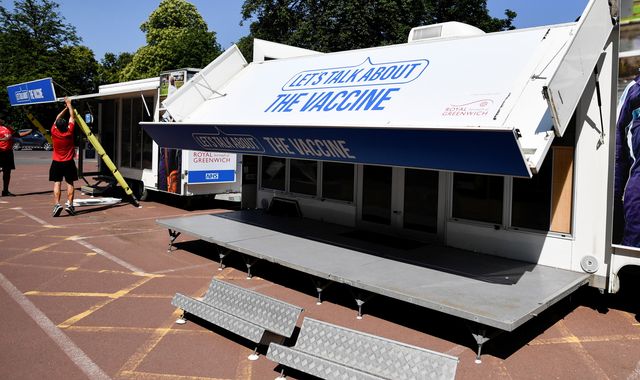 The decision to vaccinate teenagers has been slow in the UK.

Countries such as the US, Canada and France are already routinely vaccinating children as young as 12.

But the government’s experts are now confident there’s the evidence to press ahead – and the race is on to get up to 1.4 million 16 and 17-year-olds vaccinated before schools return.

That’s less than two weeks in Scotland and just four weeks away in England and Wales.

An added challenge is the resistance among some young people and parents.

“The only way I’d possibly want it is if we weren’t allowed to do things without it – for example socialising, travelling, nightclubs and stuff like that,” said Lilly, aged 17.

“I wouldn’t be happy about getting it. I’d only do it because it’s the only option.”

There’s no suggestion the vaccine will be mandated but the government has already confirmed young people will need proof of a full vaccination to enter nightclubs and crowded venues from the end of September.

Some parents feel young people are being pressured by such policy decisions.

Jo Jennings, who has two teenage daughters, said: “It’s targeting the young and the students that haven’t been vaccinated yet…They want to rush them, so they put a date on it.

“I’m prepared to homeschool my children to not go through that, to not have the vaccine, to not risk their development or anything happening to them.”

With the risk to their health low, getting a vaccine has not been a high priority for many young people. But recent spread has been high among teenagers and experts hope this move to vaccinate 16 and 17-year-olds will help contain COVID within the population.

Among some families in York, the reception to this news was more positive.

“As both my parents say, we’re the ones who are more likely to get it and take it home.”

Many parents there were in agreement, and one father said: “These guys are mixing in college and school. I think it’s a no brainer.”

To match the guidance for other young adults, eligible teenagers will only be offered the Pfizer vaccine – and just one dose for now.