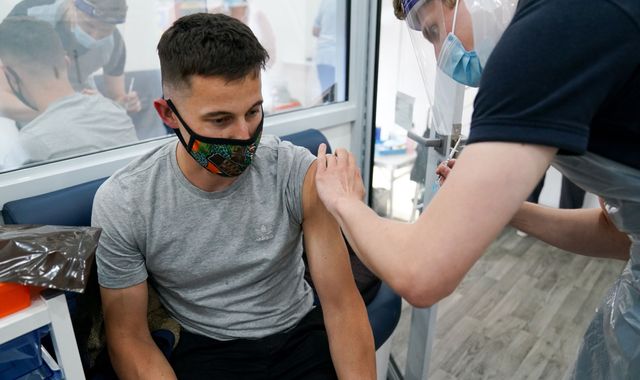 COVID-19: Chances of long COVID almost halved by having both jabs, study finds

Adults who are fully vaccinated are 47% less likely to have long COVID should they contract COVID-19, a new study says.

The team at King’s College London analysed data from more than two million people who logged their symptoms, tests, and vaccine status on the Zoe COVID Symptom Study app between 8 December 2020 and 4 July 2021.

The research, published in the Lancet, said: “We found that the odds of having symptoms for 28 days or more after post-vaccination infection were approximately halved by having two vaccine doses.

“This result suggests that the risk of long COVID is reduced in individuals who have received double vaccination, when additionally considering the already documented reduced risk of infection overall.”

It added: “Almost all individual symptoms of COVID-19 were less common in vaccinated versus unvaccinated participants, and more people in the vaccinated than in the unvaccinated groups were completely asymptomatic.”

Professor Tim Spector from King’s College, and lead investigator of the Zoe COVID study, said: “Vaccinations are massively reducing the chances of people getting long COVID in two ways.

“Firstly, by reducing the risk of any symptoms by eight-to-10-fold, and then by halving the chances of any infection turning into long COVID, if it does happen.

“Whatever the duration of symptoms, we are seeing that infections after two vaccinations are also much milder, so vaccines are really changing the disease and for the better. We are encouraging people to get their second jab as soon as they can.”

The study looked at the two main vaccines being used in the UK – the ones by Pfizer and AstraZeneca – but did not have enough evidence to look at Moderna.

Both vaccines showed a similar reduction in risk when examined independently.

It also showed that the small number of doubly-vaccinated people who get COVID-19 were also 73% less likely to be admitted to hospital, and 31% less likely to have acute symptoms.

The most common symptoms were similar to those seen in unvaccinated adults – loss of smell, cough, fever, headaches, fatigue – but all were milder and less frequently reported by those who were vaccinated.

However, people living in deprived areas were at greater risk of infection after a single vaccination, the study said, saying that those who were frail were up to two times more likely to contract the infection after vaccination.

Lead researcher, Dr Claire Steves, also from King’s College, said the good news was that being double jabbed “significantly reduces the risk of both catching the virus and, if you do, [of] developing long-standing symptoms”.

But she added: “Among our frail, older adults and those living in deprived areas the risk is still significant, and they should be urgently prioritised for second and booster vaccinations.”