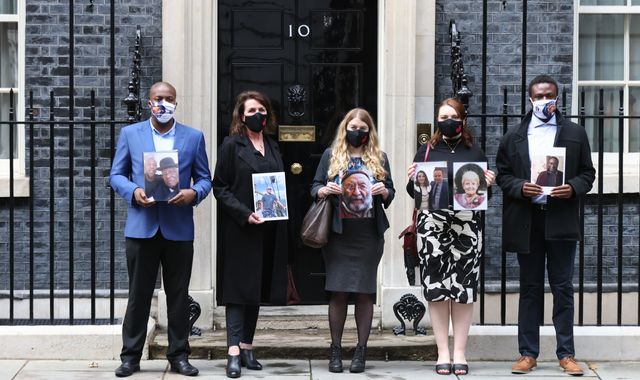 Boris Johnson has promised families who lost loved ones to coronavirus that a chair of the public inquiry will be appointed by Christmas, as he was accused of adding “insult to injury” by delaying meeting them for more than a year.

The prime minister held talks with members of COVID-19 Bereaved Families for Justice in Downing Street on Tuesday.

In May, he announced an independent public inquiry into the government’s handling of the pandemic will begin in the spring of next year.

“Although we wish this meeting had taken place a long time ago, we’re pleased that the prime minister has chosen to finally engage with us and that he explicitly acknowledged the importance of ensuring that bereaved families are at the heart of learning lessons from the pandemic,” the group said in a statement after the meeting.

“However, we are still disappointed by the lack of urgency the prime minister displayed as we see no reason why preparations for the inquiry cannot begin now, particularly as nearly 1,000 people are still losing their lives each week.”

They said Mr Johnson must deliver on his commitments, adding: “We hope that we can accept the prime minister’s commitments in good faith and, going forward, that there will be ongoing and meaningful dialogue with bereaved families.”

The group had asked for the meeting to be held outside with social distancing in place.

A Downing Street spokesperson said: “The prime minister gave a commitment that the chair of the inquiry would be appointed by Christmas.

“He set out that for now it is right that public servants continue to focus their efforts on tackling the pandemic before moving on to the inquiry in the spring of next year.

“He welcomed the opportunity to hear from Bereaved Families 4 Justice on the areas they would like the inquiry to cover and the importance of choosing the right chair and panel members, and reiterated that he takes full responsibility for the government’s handling of the pandemic.

“The prime minister welcomed the suggestion that the inquiry should hold hearings in different parts of the country.”

Mr Johnson also suggested the National COVID Memorial Wall could become a permanent national memorial to those lost during the pandemic.

Speaking afterwards, he described it as a “very emotional meeting”.

“I listened to their very sad stories of the loss they’ve suffered in their own lives,” the PM said.

“And obviously, there’s very little I could say to mitigate their own suffering. But what I did say was that we were determined to make sure that the experience of the bereaved was something we took account of in the public inquiry.

“And I also said a bit about how we would set it up and I said that we would be making sure that we had a chair of that inquiry, nominated by the end of the year.”

The campaign group was hosting an event on the fringes of the Labour Party conference in Brighton as the talks took place.

MP Jack Dromey said it added “insult to injury” that the PM was only now meeting bereaved families, 398 days after first committing to do so.

Mr Dromey added it was “absolutely key” that the inquiry’s terms of reference are agreed with bereaved families, as well as there being “full disclosure of all confidential documents” in order to understand why the government took the decisions that it did.

Fellow Labour MP Afzal Khan said he had “no doubt” that the Conservatives wanted to “delay” and “dilute” the inquiry, adding that pressure must be maintained to make sure this does not happen.

He labelled the government’s handling of the pandemic “totally inadequate”, accusing ministers of “sleeping” at every stage.

“I do believe mistakes have been made.”

Speaking to Sky News after the event, Mr Khan gave his reaction to Mr Johnson’s pledge.

“I welcome this, it’s something the bereaved families have been pushing for,” said the MP, who lost his mother, mother-in-law and father-in-law to COVID.

“That needs to be cleared up as well. The sooner we can nail this down the better it is for everyone, because it is urgent that we learn the lessons and prevent further loss of life.”

Sir Ed Davey, leader of the Liberal Democrats, said bereaved families “have already waited far too long for this inquiry”, adding: “It is vital that this inquiry is properly independent and has the full confidence of the bereaved.

“The government must consult them in choosing the chair and drafting the terms of reference.”