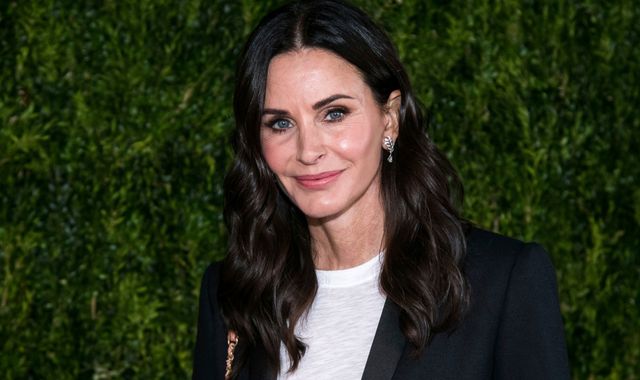 Courtney Cox’s latest TV show portrays a reality that many women will be all too familiar with.

In horror-comedy Shining Vale, her character, Pat, is trying to figure out whether she’s depressed or possessed, while being dismissed by her husband and children.

And while most of us don’t have to worry about dealing with an actual demon after moving into a potentially haunted house, Cox told Sky News’ Backstage podcast that many women of a certain age will relate to a lack of appreciation for their situation.

“I think that women probably go through a lot more than people realise – I mean, between menopause, depression, being a mom to teenagers,” she says.

The 57-year-old has recently spoken out about her past use of “injections and doing stuff” to her face in response to the pressures on actors – particularly women – to “chase” youthfulness.

Cox goes on: “It depends on how aware your partner is – in this particular case, Terry [played by actor Greg Kinnear] – he’s got the positive attitude, even though [Pat’s] freaking out, and she’s so depressed, I don’t think he wants to see it.”

The show is the brainchild of producer and former Friends writer Jeff Astrof and Sharon Horgan, the Irish writer whose previous work includes Catastrophe and Divorce – comedies which also lay bare the issues facing modern women.

And while it would be fair to assume Cox – who starred in Friends, one of the biggest TV shows of all time, and then went on to beloved horror franchise Scream – gets plenty of job offers, she says Horgan’s name was part of what made this show stand out.

“There’s not that many great things that come, I think, anyone’s way,” she explains.

“I just absolutely adore Sharon Horgan, and I’ve worked with [producer and writer] Jeff Astrof, who is so talented, and I read it and just thought, this is such a layered character, I’ve never played something so real and funny and scary.

“It was just a really layered character that I haven’t ever played before and has so many things to do throughout the series.”

Cox’s character’s husband is played by Kinnear (who once had a bit part in Friends, though the pair didn’t have scenes together).

He says the show – which is part comedy, part horror, part family drama – is difficult to pigeonhole, making it stand out from others.

Kinnear told Backstage: “It’s very hard to explain, and I think that’s ultimately an asset that it isn’t fitting right into a nice, clean box. It has its own tone, which is really hard to find, I think these days.

“I had not worked with any of these people – I knew Sharon’s work obviously, there’s some offbeat stuff she’s done and has a great comedic humour, but always a reality to it.

“And I believe this family ultimately, as crazy as things got, I always believed in the family and I thought that would be fun. And I never have done – unlike Miss Cox – I’ve never had a chance to run around and be scared, not that I’m actually scared in this show, but still it’s a start.”

In the series, Cox’s character is a writer – but she’s struggling with a huge dose of writer’s block.

The actress says that when she’s struggling creatively, she has certain go-tos, but that this part saw her seeking expert help.

She said: “I have a lot of hobbies, so when I’m in a lull period, I like to play the piano and play tennis and cook.

“But then for this part in particular, I really delved into [it] with my acting coach all the time because I wanted to not just rely on my instincts.

“I decided to really delve in and find things that I wouldn’t necessarily have come up with on my own.”

Kinnear on the other hand admits using an altogether different approach.

“I didn’t – which will probably become painfully clear – I did not work with an acting coach,” he joked.

“There was a little bit of an improvisational element to this show that we were kind of always faced with, kind of like, ‘Well, how are we going to do it?’ and I felt like we had a very collaborative world around us which opened that up and made it great fun.”

Subscribe to the Backstage podcast on Apple Podcasts, Google Podcasts, Spotify, and Spreaker

Referencing Cox’s turning to hobbies to kick-start her creative process, Kinnear adds: “But fear is a great thing – if you’re ever stuck for inspiration, fear works lovely as good as any tennis or anything else, just sheer fear.”

Shining Vale is streaming on Starzplay from Sunday. Hear our review in the new episode of Backstage, the film and TV podcast from Sky News.