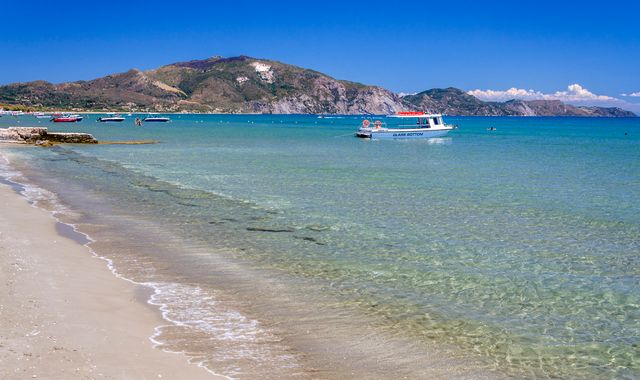 It comes as Transport Secretary Grant Shapps announced the rules are changing on which areas anyone coming back from must isolate for two weeks.

Instead of a whole-country approach to the coronavirus quarantine, individual islands will be able to be treated differently.

Mr Shapps said the new quarantine policy for seven Greek islands will come into effect from 4am on Wednesday as there was a “significant risk to UK public health from those islands”.

Travel operator TUI UK said it currently had 7,500 customers on four of the affected islands and that 14 flights scheduled to take holidaymakers there on Tuesday had been cancelled.

It has now scrapped all trips to Crete, Santorini, Zakynthos and Mykonos until 22 September – with customers able to claim a refund or switch to an alternative destination.

In contrast to the islands added to the quarantine list, mainland Greece will remain on England’s exemption list of COVID-19 “travel corridors”.

Mr Shapps explained the move to treat islands differently was not yet able to happen for regions within a country’s mainland territory.

The Department for Transport (DfT) said the new rules will only apply to land that has a “clear boundary” – such as an island – and “internationally comparable data” on COVID-19 cases.

“Our top priority has always been to keep domestic infection rates down, and today we’re taking the next step in our approach,” Mr Shapps told MPs.

“Through the use of enhanced data we will now be able to pinpoint risk in some of the most popular islands, providing increased flexibility to add or remove them – distinct from the mainland – as infection rates change.

“This development will help boost the UK’s travel industry while continuing to maintain maximum protection to public health, keeping the travelling public safe.”

It follows anger and confusion from some holidaymakers hit by last-minute changes.

Several have complained that countries added to the quarantine list have seen coronavirus cases growing in a particular region on the mainland – but the islands are still largely safe.

That was the case when Spain was added to the list in July due to a spike of infections in three northeastern regions.

The move also hit sun-seekers on the Balearic and Canary Islands – leaving some questioning why, given the popular destinations had much lower rates of COVID-19.

Mr Shapps told the Commons that no islands will be added to the “safe list” for now.

“When we removed Spain from the travel corridor list there were 24 cases per 100,000. Today there are 127 cases and it remains too high in the Balearic and Canary Islands as well,” he said.

“Passengers and the aviation industry need confidence that ministers aren’t simply making it up as they go along,” he said.

Mr McMahon added: “We are still yet to see the scientific evidence for the government’s decision making and why, unlike in Scotland and Wales, those returning from Portugal don’t need to self-isolate.

“After the mess we’ve seen, it is vital that the government undertakes a review into quarantine policy, to report as soon as possible.”

England’s new approach follows that of Wales – which last week added some Greek islands to its quarantine list and exempted several Portuguese islands.

Meanwhile Scotland has added the whole of Greece to its quarantine list.

IAG, the owner of British Airways, said it was “evident back in July” that islands should be treated separately.

“The government is being too slow in making obvious decisions,” a spokesman said.

Mr Shapps also told MPs that the DfT is “working actively” on reducing the 14-day quarantine requirement – but he said that only testing people for COVID-19 on arrival “would not work”.

Cabinet colleague Matt Hancock said earlier that he is trying to reduce the isolation period down to eight days.

The health secretary explained that one test at the border “doesn’t work” as the virus can incubate – meaning it is not able to be picked up in the early stages.

Asked if travellers could then get a second test after eight days’ quarantine which if returned a negative result could release them, he said “I’m not just made aware of it, I’m working with Grant Shapps” on the plan.

Mr Shapps said during his appearance in front of MPs that the government will be “stepping up” its quarantine enforcement measures.

Are you on holiday on one of the Greek islands? Get in touch with Sky News
:: Email – news@sky.com
:: ‘Your Report’ on Sky News apps