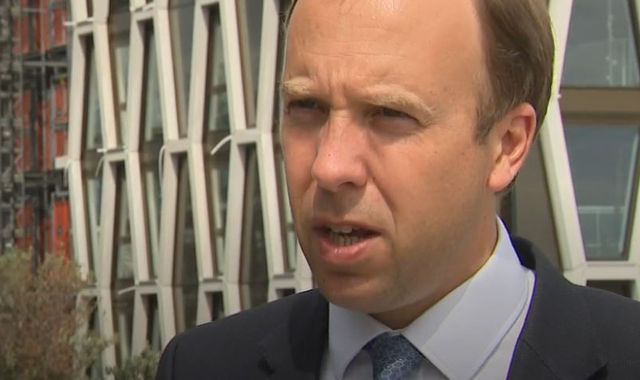 Coronavirus: Nationwide restrictions not ruled out if there is second spike in winter, says Hancock

There could be nationwide restrictions or very extensive local lockdowns in England if there is a second spike in COVID-19 cases this winter, Matt Hancock has warned.

The health secretary also said in a worst-case scenario, the UK could be fighting a bad outbreak of flu and a growth in coronavirus as people spend more time indoors.

He said: “Cases go up again, and we have to use very extensive local lockdowns or take further national action. We don’t rule that out, but we don’t want to see it.”

Mr Hancock claimed social-distancing measures would remain for the “foreseeable” future and suggested that, unless a vaccine was approved, grandparents would be unable to hug their grandchildren this Christmas.

“We’ll be keeping them in place for the foreseeable. We hope for the best and we prepare for the worst.”

Speaking to The Times, Mr Hancock said a second wave could be “avoidable but it’s not easy”, with schools reopening next week presenting new challenges in stopping the spread of the virus.

He said countries in other parts of the world were already experiencing a second spike, adding it was “a very serious threat”.

But he said the UK was managing to keep the number of new cases “flat” through the test and trace system and local lockdowns.

Under the initial lockdown in March, retail and hospitality industries had to close across the country.

Boris Johnson has compared the prospect of another nationwide lockdown to a “nuclear deterrent”.

The UK government is now encouraging workers to go back to offices, with adverts emphasising the benefits of employees returning to workplaces.

The health secretary said a vaccine was likely to be available “some time next year”, although he hoped this would be sooner.

Before then, he said, the government was relying on three “lines of defence” to stop the spread of coronavirus – social distancing, NHS test and trace, and local lockdowns.

He hoped these measures, combined with the biggest flu vaccination programme in history, would ensure that the NHS could cope.

His comments come as local COVID-19 restrictions were eased in northern England, which will allow social gatherings between two homes from Wednesday in Bolton, Stockport, Trafford, Burnley, Hyndburn and parts of Bradford, Calderdale and Kirklees.

Meanwhile, the latest R number range for the UK remains the same as last week at 0.9-1.1 – indicating the rate of infection is most likely either broadly stable or slightly growing.

The R number is a measure of how many people on average each infected person transmits the virus to.

The latest growth rate for the whole of the country is between -2% and 1%, the government said, meaning the number of new infections is somewhere between shrinking by 2% and growing by 1% every day.

(c) Sky News 2020: Coronavirus: Nationwide restrictions not ruled out if there is second spike in winter, says Hancock