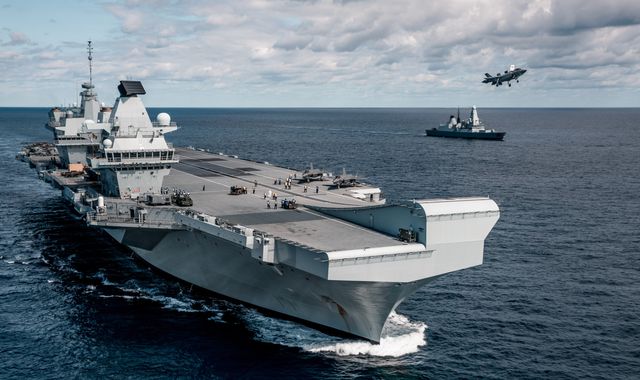 Several sailors have tested positive for coronavirus on the HMS Queen Elizabeth aircraft carrier, the Ministry of Defence has said.

“Fewer than ten” of the 1,000-strong group tested positive for COVID-19 on the ship, after the entire crew was swabbed for the virus before its latest deployment.

Those that tested positive have been taken ashore to isolate in barracks.

The ship’s planned sailing has been pushed back 24 hours and around 100 more crew are isolating onboard after coming into contact with those that tested positive.

The 65,000-tonne HMS Queen Elizabeth is currently in Portsmouth where it was due to leave for training exercises, but will now depart on Tuesday.

It is the second time it has had to delay sailing due to coronavirus, after two crew members tested positive in April.

A Royal Navy spokesman said: “A small number of HMS Queen Elizabeth’s personnel have tested positive for Covid during routine preparation for sailing.

“Those affected have been isolated and are working with the NHS Test and Trace system to ensure the virus does not spread further.

“The crew will continue to follow appropriate health guidelines and the HMS Queen Elizabeth will depart once their status has been confirmed.”

The spokesman added that it was ultimately up to the commanding officer of the ship, Captain Angus Essenhigh, as to when it can sail again, and will act on guidance from Public Health England.

It is using the training exercises – involving UK and US F-35 Lightning jets – to declare it is strike carrier capable ahead of its first operational deployment next year.