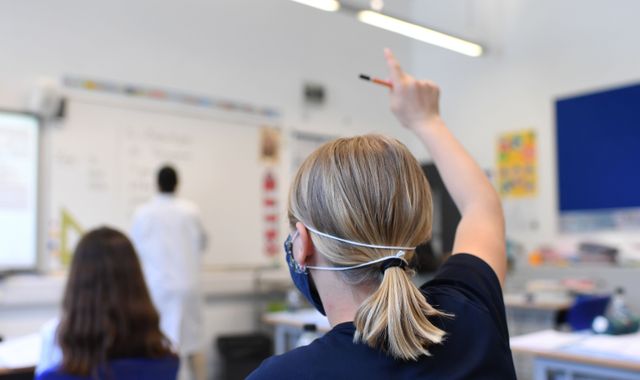 Children are more likely to catch coronavirus at home than at school, a Public Health England (PHE) study has found.

Reported coronavirus cases, clusters and outbreaks were reviewed daily across all educational settings in England until the end of July as part of the study.

PHE found that there were more likely to be outbreaks in those areas that also had a high COVID-19 incidence, suggesting transmission in the community was driving the spread in schools.

The study also found staff members were more likely to be affected by the virus than students, though not more likely than the general population as a whole.

Where children did contract the infection, they were most likely to catch COVID-19 at home, usually from a parent.

Half the outbreaks did not involve any students at all and transmission between students was very rare.

Sue Hannam, headteacher at Lichfield Cathedral School in Staffordshire, has said there will be an element of “trial and error” when her pupils return.

She told Sky News: “I think the problem for me at the moment is, if we have someone in the school who is symptomatic, we know that we have to send them home, we know that if they are tested and the tests are positive, that we contact our local public health office who will then give us further guidance.

“Our real concern is that we know in the autumn term, lots of children will be coming to school with coughs and colds and sneezes… there is a real risk I think of sending a lot of children home because we have to.”

She added: “There’s going to have to be a degree of trial and error as we go into next term.”

Professor Chris Whitty, the chief medical officer for England, has acknowledged the government is having to “balance risks” in relation to whether children should return to their education during the coronavirus outbreak.

But he added he believes pupils are more likely to be “harmed by not going than by going, even during this pandemic”.

Prime Minister Boris Johnson wants all pupils to return to school next month, saying it is the “right thing for everybody”.

Professor Whitty said: “The first thing to say is that the evidence that not going to school damages children in the long run is overwhelming and that includes their long-term chances.

Professor Whitty has said the reopening of schools will “put pressure” on the R number and could lead to the closure of pubs and shops at a local level.

He also said there is “overwhelming clear evidence that the chances of children dying from COVID are incredibly small” as he aimed to address parents’ concerns over the health risks of children returning to school.

Professor Whitty added “there’s some evidence that children, particularly in primary school, are actually less likely to catch COVID in the first place”.

He said: “There’s also very clear evidence from the UK and around the world that children much less commonly get a severe illness and end up having to be hospitalised if they get symptomatic COVID at probably a rate of less than a tenth of the general population.”

Professor Whitty acknowledged that children will undoubtedly bring households together who wouldn’t come into contact if schools were closed.

He added some of this will happen directly as children from households will meet, but it was also happen indirectly as it will free up some people to go to work.

Professor Whitty said: “By opening schools, which I think everybody agrees is absolutely essential for the education of children, we are going to bring households together who might not otherwise be together.

“The result of that is that it will create some upward pressure on the R, it may increase it… if that happens we will have to respond.”

The R number is a measure of how many people on average each infected person transmits the virus on to.

Professor Whitty said it is possible other areas of society will face restrictions in order to keep schools open.

He said the aim will be for these measures to be put in place locally to target areas where there has been a surge in transmission.

He added: “But I do want to be really clear, even with all the information we have got now, even with all the tools we have at our disposal now, we have still got a really serious challenge of coronavirus for at least the next nine months.”

Labour leader Sir Keir Starmer has said the prime minister’s promise to get all children back to school had been put at “serious risk” by a “week of chaos” over exam results.

He said the last two weeks have been “wasted clearing up a mess of the government’s own making”, telling The Observer: “I want to see children back at school next month, and I expect the prime minister to deliver on that commitment.

“However, the commitment is now at serious risk after a week of chaos, confusion and incompetence from the government.

“Ministers should have spent the summer implementing a national plan to get all children back to school. Instead, the last two weeks have been wasted clearing up a mess of the government’s own making over exam results.”

Meanwhile, the World Health Organisation has said children aged 12 and over should wear masks when they cannot guarantee social distancing of at least one metre to limit the spread of the virus.

Children between six and 11 should use them on a “risk-based approach”, the global body added.

The UK recorded a further 1,041 confirmed cases of COVID-19 on Sunday, down from 1,288 on Saturday, according to government figures.

Six people died after testing positive for coronavirus within the previous 28 days, compared with 18 deaths announced on Saturday.