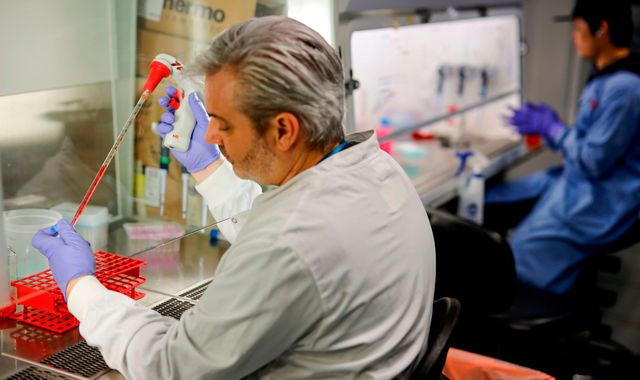 Coronavirus: Any UK vaccine to be made in Britain ‘for fear US will take it’, scientists say

British scientists developing a vaccine against COVID-19 won’t make the jab in the United States in case the Trump administration insists it is used to protect America first.

In an exclusive interview with Sky News, Professor Robin Shattock, who has just started clinical trials of a prototype vaccine at Imperial College London, said he had been urged by the government to make the vaccine in the UK.

The White House recently cornered the global supply of the US-made coronavirus treatment Remdesivir, leading to fears that vaccines made on American soil could be prevented from being exported.

Professor Shattock said: “One of the things that sounds alarm bells is the nationalism of wanting to buy things out.

“Luckily we are not making our vaccine in the United States.

“It is a deliberate policy, it is something we were encouraged to do by the UK government, to make sure there is capacity in the UK for manufacturing.

“It would be naive to think there won’t be a scramble for the first vaccine shown to work. But it’s important there is equitable access globally.”

The Imperial vaccine is one of 23 prototypes now in clinical trials around the world, with a further 140 in early development. Sky News will track their progress in the coming months as part of a new project called Race for a Vaccine.

“Definitely there is pressure to deliver,” said Professor Shattock.

“We recognise how much we need to prevent fatalities and get the economy up and running again. [The pandemic] has affected everybody’s life.”

The UK government is confident that Russian state-sponsored hackers have attempted to disrupt British vaccine trials or even steal the formula.

But Professor Shattock downplayed the risk.

He said: “What we are more concerned about, and the world will wake up to very soon, is as soon as one vaccine works there will be the issue of fake vaccine.

“If people cannot access the (real) vaccine there will be people who say they have a special deal. People will seek to profiteer out of selling fake vaccines to vulnerable populations.

“The best way to solve that problem is the world community coming together and making a real vaccine as fast as possible at an affordable price.”

The Imperial vaccine, code-named LNP-nCoVsaRNA, contains a short section of the genetic material RNA from the virus that causes COVID-19.

The RNA is taken up by muscle cells near the injection site, which then produce large quantities of a viral protein that should stimulate an immune response to protect against the real virus.

Sky News was given access to Professor Shattock’s laboratory to film scientists analysing volunteers’ blood samples for antibodies and T-cells, which are another key part of the immune system.

There are no safety concerns so far, but the Imperial scientists won’t reveal whether volunteers make high levels of antibodies that can neutralise the virus.

A small number of healthy volunteers are being given the vaccine as part of a phase 1 safety trial, but the team hopes to quickly progress to much larger studies within weeks to test whether the vaccine protects against the virus.

It’s likely those trials will take place in South Africa and Brazil, where the COVID-19 epidemic is out of control.

Although Imperial currently trails behind the Jenner Institute in Oxford and the US company Moderna, which have both completed phase 1 studies of their prototype vaccines, the team is confident they can catch up.

Professor Shattock believes the first COVID-19 vaccines will be available in the first half of next year, but warned it’s unwise to bet on which one of the many candidates will be first.

“There is always a danger of over-promising,” he said. “It’s better to under-promise and over-deliver.

“There is no certainty for any individual candidate. But there is a high chance of success because globally we have so many candidates.”

(c) Sky News 2020: Coronavirus: Any UK vaccine to be made in Britain ‘for fear US will take it’, scientists say