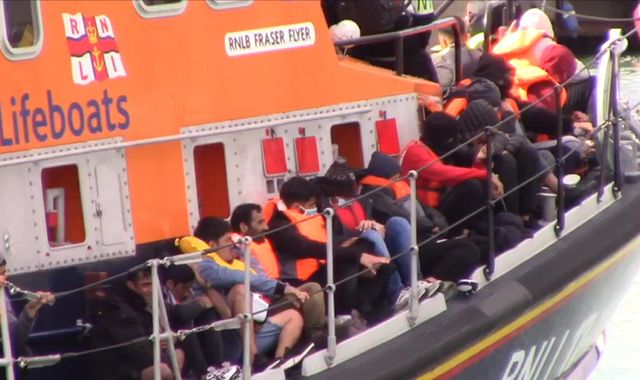 Hundreds were intercepted in the water while others managed to land on beaches, according to the Home Office.

It brings the total number who have successfully made the journey this year to more than 5,600.

The previous one day record was 235, set on August 6 this year.

It comes as Prime Minister Boris Johnson said the UK is a “target and magnet” for people traffickers and promised to change the law to help tackle the crisis.

That is despite Home Secretary Priti Patel saying last year the migrant crossings would become an “infrequent phenomenon” by spring 2020.

Bright and clear conditions meant that France was clearly visible from Dover throughout Wednesday.

Migrants were seen being brought into Dover aboard Border Force patrol vessels and sitting on the front of lifeboats.

Some smiled and waved as they arrived while others carried toddlers.

Dozens spent an hour sitting on Border Force boats in the harbour before they were allowed to disembark.

While the Home Office confirmed 409 migrants reached the UK by small boat, more incidents were ongoing and that number could be revised up.

Earlier immigration minister Chris Philp told the Commons: “We are working closely with our French colleagues to prevent these crossings. This includes patrols of the beaches by French officers, some of whom we fund, surveillance and intelligence sharing.”

In recent weeks, the government has blamed French authorities and “activist lawyers” for rising numbers of crossings and difficulties removing asylum seekers once they arrive in Britain.

Also in August, Sudanese migrant Abdulfatah Hamdallah drowned trying to cross the Channel having attempted to use shovels for oars on a makeshift boat.